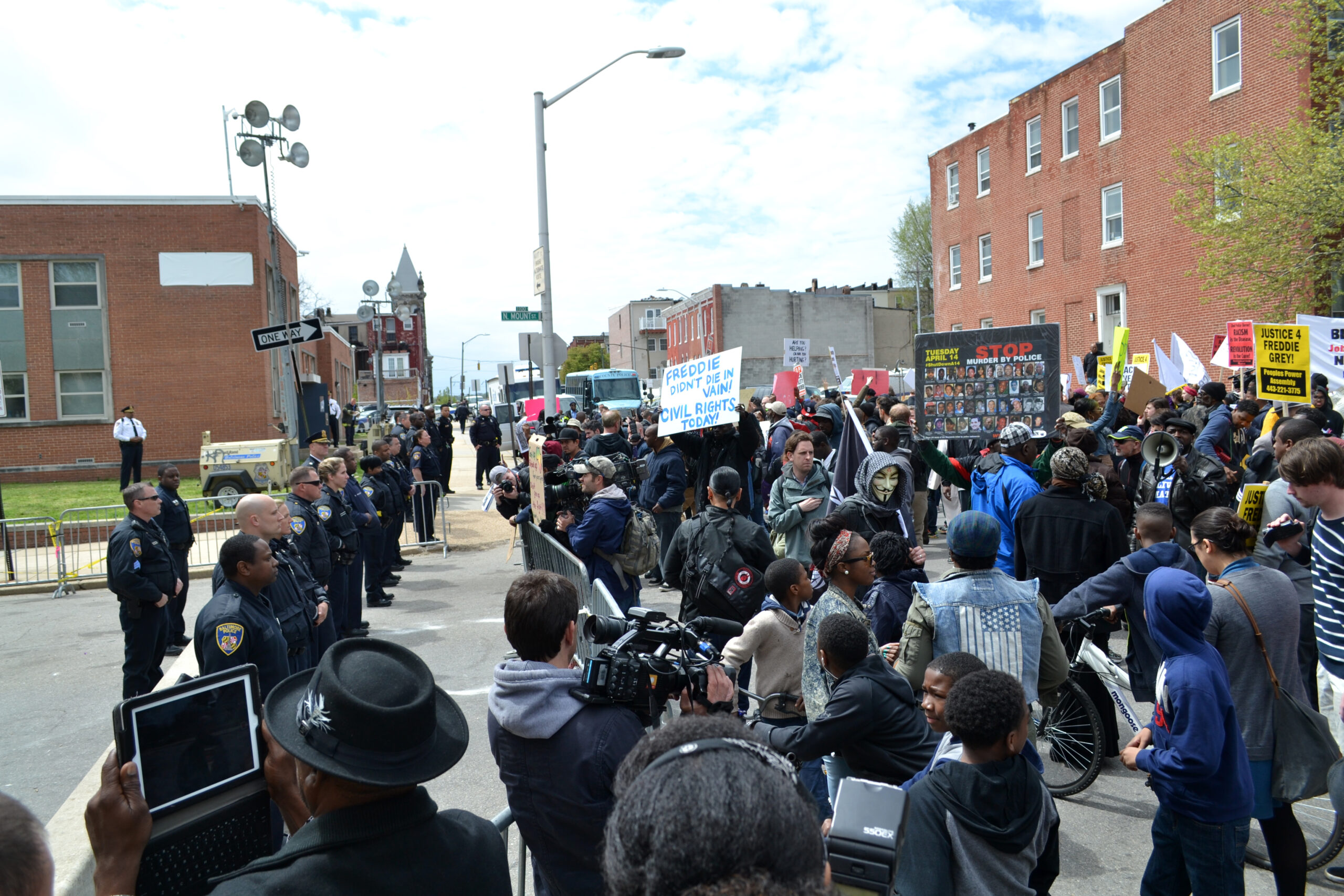 The death of a 25-year-old black man, Freddie Gray, while in the custody of the Baltimore Police Department led to an outcry in Baltimore, Maryland and eventually across the nation. As the tensions became greater, peaceful protests became violent and resulted in the most extensive rioting in Baltimore since the 1960s. Unlike other uprisings these riots continued to be interspersed with peaceful protests.

The first violent protests came on April 18 outside the Western District police station where hundreds of citizens gathered.  Although the crowd was initially peaceful as it protested Gray’s incarceration and treatment, it turned violent.  The violence escalated quickly and spread over the city within hours of the announcement of Gray’s death on April 19, 2015, a week after his arrest by Baltimore police. After Gray’s funeral on April 27, rioting spread from the West Baltimore neighborhood where Gray lived into downtown Baltimore and the Inner Harbor.  A mandatory curfew was ordered by Baltimore’s mayor Stephanie Rawlings-Blake on April 28, and the same day Maryland Governor Larry Hogan ordered in the first of 2,500 National Guard troops to Baltimore to help restore order.  The mandatory curfew was rescinded on May 3 and the Maryland National Guard left the city on May 4, the last day of violence.

During that 16-day period of rioting and peaceful protests at least one hundred thirteen police officers were injured and two civilians were shot, 486 people were arrested, and 350 businesses were damaged.  There were also 150 vehicle fires, including a number of police cars and vans set ablaze.  Two people were shot and one injured by fire, but there were no fatalities.

On April 28, President Barack Obama was among those condemning the violence. He said the destruction was “counterproductive,” and accused the rioters of “stealing” property when they engaged in looting.  Members of Freddie Gray’s own family also condemned the actions of the rioters. While expressing that she wanted justice, Gloria Darden, Gray’s mother, said “Don’t tear up the whole city for him”.

State’s Attorney Marilyn Mosby brought charges against six police officers–Lieutenant Brian Rice, Sergeant Alicia White, Officer William Porter, Officer Garrett Miller, Officer Edward Nero, and Officer Caesar Goodson–in Gray’s death. Three of the officers were white and three were black.  Mosely claimed the officers had not given Gray proper medical treatment after his arrest which led to his death.  The officers, in turn, sued Mosby for knowingly bringing false charges against them.  Eventually, separate trials would be scheduled for each of the officers. The first case, against Officer William Porter, ended in a mistrial, and three of the other officers were acquitted.  By mid-July all charges were dropped against Porter and the two remaining officers. While the U.S. Justice Department had initially considered opening a civil rights investigation into the matter, they ultimately decided not to press charges in federal court.  Nonetheless, the Freddie Gray case served as a rallying cry for the recently formed Black Lives Matter movement.