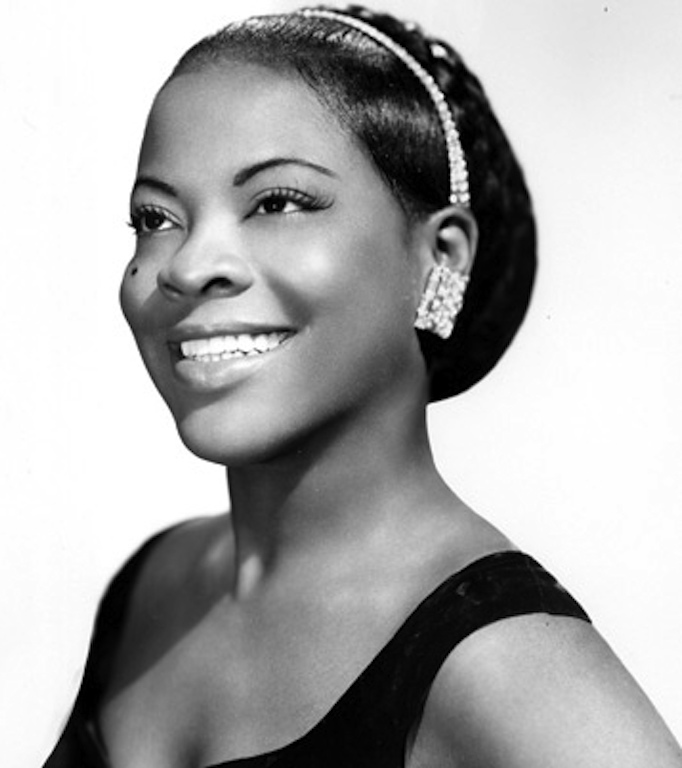 R&B singer LaVern Baker was born Delores LaVern Evans in Chicago, Illinois on November 11, 1929. Baker was described as one of the most eccentric, beautiful divas of her time. Although her actual music career wouldn’t begin until 1949 she first began singing in Chicago as early as 1946 going under the stage name Little Miss Sharecropper. She signed with Okeh Records in 1951 at the age of 22, initially using the name Bea Baker but by 1952 she changed it to LaVern Baker.

Baker also dabbled in TV and movies. She was feature in two Alan Freed’s movies, Rock, Rock, Rock and Mr. Rock and Roll, released in 1956 and 1957.  In 1955 she became the first R&B artist to appear on the Ed Sullivan TV show. Between 1958 and 1964 she released “I Cried a Tear,” “Saved,” and “On This Revival Day,” a Bessie Smith tribute, all for Atlantic Records before departing from the label in 1964 to sign with Brunswick Records. In 1966 she was teamed with Jackie Wilson and they release a duet called “Think Twice” which proved controversial due to its explicit lyrics.

LaVern Baker would go on a USO tour later in 1966. While in Vietnam she would fall ill with pneumonia and would end up in a Thai hospital recovering. By the time she was healthy in 1967, the tour had gone back to the U.S., leaving Baker alone. She would end up in the Philippines in poor health again. Her husband at the time, comedian Slappy White, whom she married in 1961, had assumed she died while on tour and divorced her in 1969.  Baker would end up on Naval Base Subic Bay in the Philippines and would direct a NCO night club for 22 years after accepting her new life.

Back in the United States, she performed for the Atlantic Records 40th Anniversary and worked on several movie soundtracks throughout the late 80’s and early 90’s such as Angel Heart, Dick Tracy, and A Rage in Harlem. At 62, the still-talented Baker was the star of the 1991 musical Black and Blue.

In 1992 Atlantic Records produced Soul on Fire, a compilation of Baker’s greats hits.  She then recorded the album Woke Up This Morning later in 1992 for DRG Records. Two years later tragedy struck when at 65 both of her legs were amputated due to diabetes. She continued to perform, however and in 1995 she recorded her last song, “For the Love of Harry,” for a Harry Nilsson tribute.

In 1990 Baker joined only seven other artists when she was given the R&B Foundation Pioneer Award.  In 1991 she became only the second woman after Aretha Franklin to be inducted into the Rock and Roll Hall of Fame. Her song “Jim Dandy,” which was released in 1956, was included in Rolling Stone’s top 500 songs of all time. The song would also be included in the Rock and Roll Hall of Fame’s songs that shaped rock.

On March 10, 1997, LaVern Baker passed away in Queens, New York due to cardiovascular disease.  She was 67. Although Lavern Baker would marry once in her lifetime she would never conceive any children.