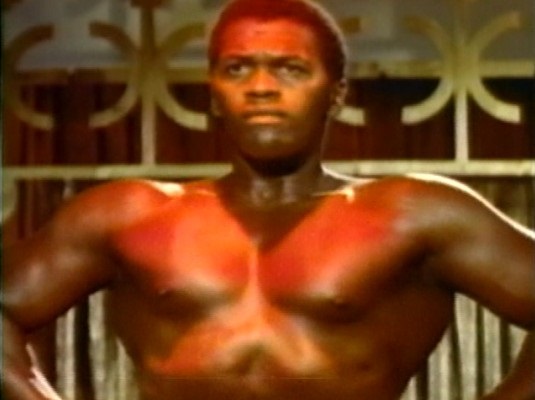 The physical presence that black British actor Harry Baird brought to the movie screen was largely a consequence of the United Kingdom going through the birthing pain of racism during the 1950s and 1960s.  Born in Guyana, this premier black actor was no Paul Robeson, but Harry Baird carried with him a presence that spoke to Britain’s patronizing advancement out of the stone-age of colonial imperialism.

Largely unknown to American audiences, except perhaps as the black American G.I. protagonist in maverick African American director Melvin Van Peebles’s Story of a Three-day Pass (1968), Baird should also be remembered as the victim of police brutality in Sapphire (1959).  That particular film was an honest though limited attempt by the English to confront bigotry within the motherland.  Baird excelled as the good-time Johnnie Tiger, the acquaintance of a murdered black girl passing for white.  The interrogation scene depicting the massive Baird/Tiger humbling himself before the wimpy white detective is both sensitive and maddening, for it reflected the brutal reality of racism in the criminal justice system then and now across the African Diaspora.

Baird appeared in mostly British-made films; some forgettable (or should be), such as the soft-core Cool it, Carol (1970) and 1000 Convicts and a Woman (1971).  He was in over 36 movies and TV programs throughout his career.  Given what the industry offered him, Baird managed to maintain his own dignity and those of the characters he played.   He was Big William, the get-away driver in The Italian Job (1969), with actor Michael Caine.  Off camera the two were genuine friends.  Baird died in 2005 in London, England.