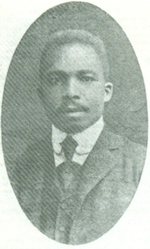 Determined to study law in the United States, William McDonald Austin moved from his home in Barbados to San Francisco, California when he was a young man. He moved again from San Francisco to Seattle, Washington when he was admitted to the University of Washington law school in 1899. Austin was accepted by his peers at the University despite being the only student of color in the school of law, and was elected to act as treasurer of the junior class. He completed his senior thesis titled, “The Civil Rights Act,” in 1902, and in June of the same year he became the first African American to graduate from UW with a bachelor of laws degree. In the 1902 student yearbook the Tyee, William Austin is quoted: “The gravity and Stillness of your youth the world hath noted.”

Austin was admitted to practice law by the Washington State Supreme Court after passing an examination with a highly satisfactory score. He found the opportunities presented to him after law school to be unsatisfactory, and in October of 1902 he left Seattle on a steam ship bound for Manila in the Philippines, where he had professional connections and intended to practice law.  Very little is known about William McDonald Austin after he departed for the Philippines.