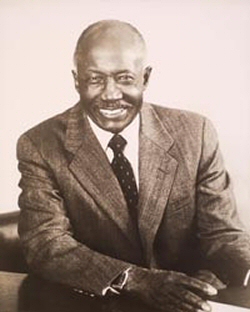 Richard Henry Austin was born on May 6, 1913 in Stouts Mountain, Alabama, the son of Richard H. and Leila (Hill) Austin.  Austin shined and sold shoes while studying at the Detroit Institute of Technology at night.  After graduating from the Institute in 1937, he became a Certified Public Accountant (CPA) in 1941 (the first African American to do so in Michigan), and founded his own accounting firm.  Austin then helped other blacks in the Detroit area form businesses, foundations, and civic groups.

Richard Austin also became very active in political and civil rights groups in Detroit.  In 1969, he was almost elected the city’s first black mayor.  He led in the primary but was defeated by a margin of 51 to 49 percent in the general election.  Two years later, however, Austin garnered a 300,000 vote majority over his opponent to become Michigan’s first African American Secretary of State.  He was subsequently reelected four times.

As Secretary of State, Austin directed the agency which supervised elections, granted automobile driver and boat licenses, and heard license appeals.  He was also the keeper of the state’s Great Seal, keeper of its official records, and head of the Archives of the State Government.  Austin headed the agency which employed more than 2,500 persons in 250 branches throughout the state from 1971 to 1994.  During his term he led a 14 year campaign to enact a vehicle safety belt law which was passed in 1985.  He also was a leading advocate for Michigan’s child passenger safety law, supported stiffer penalties for drinking drivers, and led the effort to retain the state motorcycle helmet law.

Richard Henry Austin, a member of Sigma Pi Phi fraternity, died in Detroit, Michigan on April 20, 2001. He was 87.