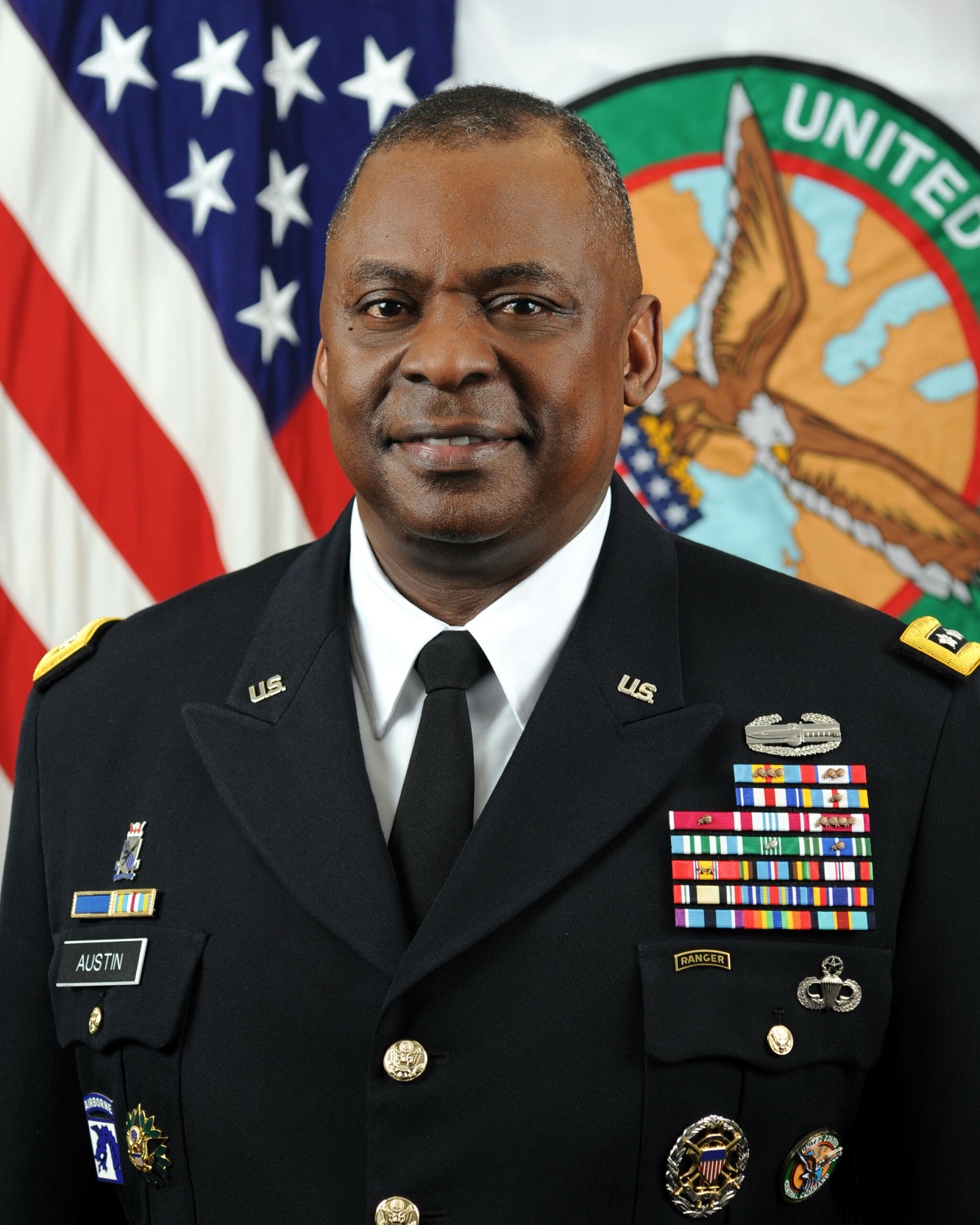 Lloyd J. Austin is the first African American to serve as U.S. Secretary of Defense. He was nominated by President Joseph Biden and confirmed by the United States Senate. A former four-star General in the U.S. Army, Austin was born in Mobile, Alabama on August 8, 1953, but grew up in a farming community in Thomasville, Georgia. Austin lived with his mother Aletia Taylor Austin, a devout Catholic, and his five siblings. As an outstanding high school student and athlete, he was awarded an academic scholarship to attend the University of Notre Dame but was persuaded by his father, Lloyd Austin Sr., a postal worker, to enroll in the United States Military Academy at West Point in New York. While there, Austin played rugby and joined the track team. In 1975, he graduated and chose a military career.

In 1975, Austin was first assigned to be a platoon leader in the 3rd Infantry Division in Germany. He continued to advance through the ranks and returned to the classroom to earn master’s degrees in counselor education at Auburn University and business management at Webster University. In 1993, he became Commander of the 2nd Battalion, 505th Parachute Infantry Regiment at Fort Bragg, and later was Commander of the 3rd Brigade, 82d Airborne Division. From 1999 to 2001, he served as Chief, Joint Operations Division, J-3 on the Joint Staff at the Pentagon.

Beginning in 2001, Austin was the Assistant Division Commander for the 3rd Infantry Division at Fort Stewart in Georgia and Operation Iraqi Freedom. In 2003, he was Commanding General for 10th Mountain Division at Fort Drum in New York and while there served a tour in Afghanistan as Commander, Combined Joint Task Force-180. In 2005, Austin served as the Chief of Staff of the United States Central Command and, in 2006, was Commanding General of the XVIII Airborne Corps. From 2008 to 2009, he served in Iraq as Commander of Multi-National Corps before in 2010 becoming Commanding General of all U.S. Forces in Iraq, In this position, he worked to decrease and redeploy American military forces in Iraq, nearly 50,000 personnel in the nation. In early 2012, Austin began a yearlong stint as Vice Chief of Staff of the Army, managing its daily operations, overseeing a budget of billions of dollars, and handling cases of suicides, mental health issues, and physical injuries arising from U.S. military involvement in Iraq and Afghanistan.

In 2013, Austin finished his military career as Commander of CENTCOM (U.S. Central Command) with many honors and awards. By that point he was responsible for 150,000 personnel from 20 nations under his leadership. He was awarded the Silver Star Medal for valor in combat, the Defense Distinguished Service Medal (with Three Oak Leaf Clusters), and the Legion of Merit.

He officially retired from the military on April 5, 2016. Austin now serves on the boards of Guest Services, a hospitality management company; United Technologies Corporation, a high-technology systems and services company; Nucor Corporation, a producer of steel products; and the philanthropic Carnegie Corporation. Austin was nominated for defense secretary in December 2020 and was confirmed by a 93-2 Senate vote on January 22, 2021.

Austin resides in the Washington, D.C. Area with his wife Charlene.