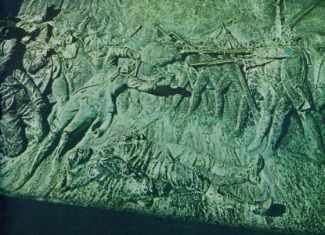 Crispus Attucks, the first martyr of the Boston Massacre in 1770, was
probably born near Framingham, Massachusetts, a Christianized and
multitribal town of Indians, whites, and blacks, in 1723.  Unusually
tall for the era at six feet, two inches, Attucks was of mixed ancestry,
the son of an African American man and an American Indian woman.  It is
believed that he was the slave of William Brown since he was reported
in the Boston Gazette on October 2, 1750 as having escaped from Brown;
Attucks was listed as age 27 at the time. By the time of the Massacre he
was 47 and working as a sailor in Boston and around the Atlantic Basin.

By 1770, the colonists of Boston had been harassed by the British
soldiers known as the “Redcoats.” Tired of the harassment, on March 5, 1770, Crispus Attucks
and his compatriots marched up to the King Streets Custom House with
banners calling for independence from England. They allegedly threatened
the British guards with clubs, chunks of ice, and rocks. What actually
happened in the confrontation between the colonists and the British
soldiers is debatable. What is known is that “[a] group of citizens,
apparently led by a tall robust man with a dark face appeared on the
scene” and confronted the eight British soldiers. The soldiers fired and
Attucks and three other men, Samuel Gray, Samuel Maverick, and James
Caldwell, were killed.  On November 27, 1770, the soldiers were tried in
a Boston court for murder.  During the trial it was reported that
Attucks fell first with one bullet lodged in his right chest. He was
shot by the British soldier William Warren.

Six of the eight British soldiers were acquitted on the grounds of
self-defense while the remaining two received a conviction of a lesser
charge than manslaughter. John Adams, who would become the second
president of the United States, suppressed his own desire for
independence from the British in order to give the soldiers legal
representation he felt they deserved.

By the time of the Revolution the Boston Massacre was already enshrined
in memory as the first deadly confrontation in the struggle for American
independence from the British. Religious and political leaders gave
sermons and speeches commemorating the “fallen ones” in the massacre.
Freed African Americans in Massachusetts, inspired by Attucks’ heroism,
began to successfully petition for their freedom.

By the 1850s, African Americans had long hailed Attucks as a
Revolutionary patriot and as a symbol of loyalty, black citizenship, and
racial pride. His service to the nation provided arguments for the
abolitionists in their quest to end the institution of slavery. On March
5, 1858, just prior to the Civil War, prominent black Boston
abolitionists William C. Nell and Lewis Hayden, invoked Attucks’ actions again when they established a Crispus Attucks Day with a festival at Faneuil Hall.

In 1998, the United States minted a coin in honor of Attucks to mark the
275th anniversary of his birth and to celebrate African American
Revolutionary patriots. Today, African Americans remember Attucks’ life
through Attucks Day Celebrations, organizations and institutions bearing
his name, and a monument to him on the Boston Common.

The Liberator, March 28, 1862; Sidney Kaplan and Emma Nogrady Kaplan, The
Black Presence in the Era of the American Revolution
(Amherst: The
University of Massachusetts Press, 1989); The Trial of William Wemms,
James Hartegan, William M’Cauley, Hugh White, Matthew Killroy, William
Warren, John Carrol, and Hugh Montgomery, soldiers in His Majesty’s 29th
Regiment of Foot, for the murder of Crispus Attucks, Samuel Gray,
Samuel Maverick, James Caldwell, and Patrick Carr, on Monday-evening,
the 5th of March, 1770, at the Superior Court of Judicature, Court of
Assize, and general goal delivery, held at Boston. The 27th day of
November, 1770, by adjournment. Before the Hon. Benjamin Lynde, John
Cushing, Peter Oliver, and Edmund Trowbridge, Esquires, justices of said
court: Published by permission of the court (Boston, MA: printed by J.
Fleeming, and sold at his printing-office, nearly opposite the
White-Horse Tavern in Newbury-Street, 1770); Mitch Kachun, “From
Forgotten Founder to Indispensable Icon: Crispus Attucks, Black
Citizenship, and Collective Memory, 1770-1865,” Journal of the Early
Republic, June 2009.