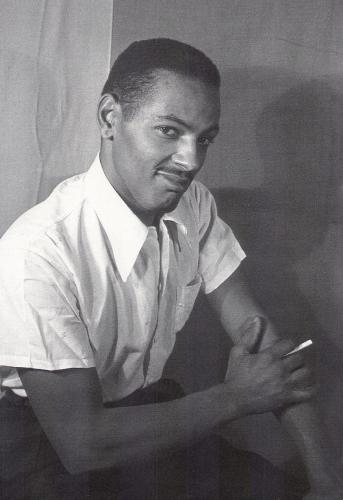 William Attaway, writer and composer, was born in Greenville, Mississippi. His mother, Florence Parry Attaway, worked as a teacher and his father, William Alexander Attaway, was a doctor who helped create the National Negro Insurance Association. In the 1910s, the family moved to Chicago, Illinois.

Langston Hughes’s work inspired Attaway to start writing in high school, an avocation he continued while studying at the University of Illinois. When his father died in 1931, Attaway took a two-year leave of absence from school. Traveling around the country, Attaway worked a variety of jobs, including seaman, dockworker, and salesman.

After Attaway returned to college in 1933, he wrote the play Carnival (1935) for his sister Ruth’s theatre group which was first staged at the University of Illinois.  The same year, Attaway also became involved in the Federal Writers Project (FWP). Through the FWP, he met Richard Wright, who would become an important literary influence and friend.  In 1936, he earned his B.A. from the University of Illinois and Challenge published his short story, “The Tale of the Blackamoor.”

After graduation, Attaway travelled the country and then settled in New York City. He became an actor and performed with the touring company of You Can’t Take It With You. He also supported himself as a salesman and labor organizer. In 1939, he published his first novel, Let Me Breathe Thunder, about two white migrant farmers in the Depression Era West. He received a grant from the Rosenwald Foundation, which helped him write his second novel Blood on the Forge (1941) about the Great Migration experience of three black brothers. As a result of this novel, Attaway often is remembered as a writer of the Great Migration experience.

Although praised by critics, Attaway’s novels were not commercially successful, leading him to turn to writing for television, radio, and film as well as composing. In the late 1950s and 1960s, his television writing credits included Dave Garroway’s Wide Wide World, The Colgate Hour, and a special One Hundred Years of Laughter (1966) on black humor. Attaway adapted Irving Wallace’s novel The Man into a screenplay, but the script was never produced. He studied Caribbean music and published a song collection, Calypso Song Book (1957), as well as a history of music for children, Hear America Singing (1967). He wrote and adapted songs for artists such as Harry Belafonte, including the “Banana Boat Song (Day-O),” which he co-wrote with Irving Burgie.

In 1962, Attaway married Frances Settele and they had two children, William and Noelle. For eleven years, his family lived in Barbados where he continued to study Caribbean culture and music. He spent the last years of his life in Berkeley and Los Angeles, California. Attaway died of a heart attack on June 17, 1986 in Los Angeles.