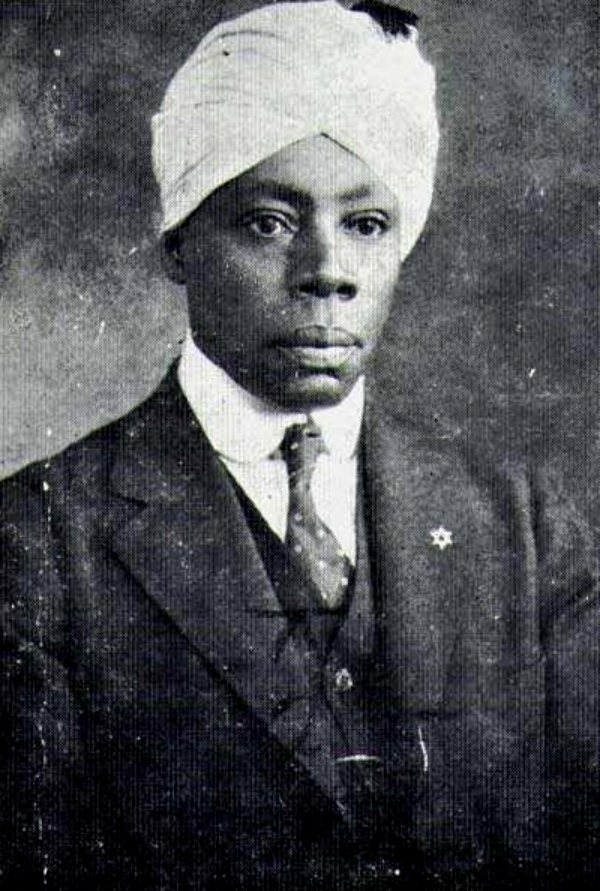 Arnold Josiah Ford was a black nationalist, rabbi, and emigrationist. Ford was born on April 23, 1877 in Bridgetown, Barbados to Edward Ford, a policeman, and Elizabeth Augusta Braithwaite, a homemaker. Ford parents wanted him to become a musician and provided him with private tutors who instructed him in the harp, violin, and bass. He studied music theory with Edmestone Barnes in Bridgetown and in 1899 at the age of 22, Ford joined the musical corps of the British Royal Navy where he served on the HMS Alert. Ford was stationed on the island of Bermuda where he was a clerk at the Court of Federal Assize.

In 1910, Ford arrived at Harlem, New York where he joined the Clef Club Orchestra directed by James Reese Europe. Ford later became director of the New Amsterdam Musical Association. He was also a member of the Scottish Rite Masons where he served as Master of the Memmon Lodge. During this time, he married Olive Nurse and the couple had two children before divorcing in 1924.

In 1919 Ford became the Musical director of the New York division of Marcus Garvey’s Universal Negro Improvement Association (UNIA). Ford was responsible for orchestrating much of the pageantry of UNIA ceremonies. Ford and Benjamin E. Burrell wrote the song, “Ethiopia,” which extolled the halcyon past before slavery and stressed pride in the African heritage. The song later became the UNIA Anthem and Ford published the UNIA Hymnal. Ford and E.L Gaines wrote the handbook of rules and regulations for the African Legion and the Black Cross Nurses.

In 1920, Ford was elected one of the delegates representing the 35,000 members of the New York chapter at the first chapter at the First International Convention of Negro Peoples of the World held at Madison Square Garden. It was during that event that the UNIA adopted the organization’s red, black, and green flag. In 1924, however Ford broke with the UNIA bringing separate lawsuits against Marcus Garvey and the Association because they failed to pay him royalties from the sale of recordings and sheet music. Ford won both lawsuits.

Ford, who also studied the Hebrew language, religion, and history, converted to Judaism in 1924 after breaking with the UNIA. He started a short-lived congregation called Beth B’nas Israel and then established the Beth B’nal Abraham Temple in Harlem that year. He also worked with Mordecai Herman and the Moorish Zionist Temple in New Jersey.

In 1928, Ford created the B’nai Abraham Progressive Corporation which issued hundreds of shares of stock and purchased two buildings where he and his followers operated a religious and vocational school on the ground floor and leased apartments on the second floor. After the onset of the Great Depression, the corporation went bankrupt in 1930.

Ford then left the United States and arrived in Ethiopia along with a group of his most devoted followers including musicians. Ford and the musicians performed at local hotels around the capital city, Addis Ababa. In 1931, Mignon Innis became Ford’s private secretary and later his wife. The couple had two children together. Ford was able to create a school near Addis Ababa and get 800 acres of land for the purpose of uniting the Black Jews of the diaspora. He did not live to see the success of that effort. Arnold Josiah Ford died on September 15, 1935 in Addis Ababa, Ethiopia at the age of 58.