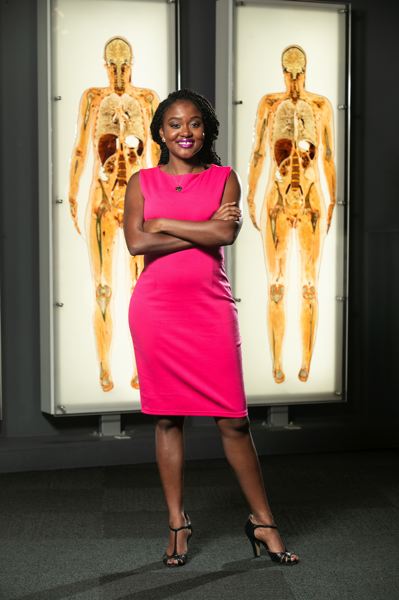 Dr. Arlyne Simon is a biomedical engineer, patented inventor, and author of children’s literature. She was born in 1986 on the Caribbean Island of Dominica to Beverly Stedman-Andrew, a primary school teacher, and Lionel Simon, a civil engineer.

Simon earned a Ph.D. in macromolecular science and engineering from the University of Michigan in 2014. During her last two years of graduate school, Simon worked in a 17-person lab where she was the only woman. Simon also earned an undergraduate degree in chemical & biomolecular engineering from Georgia Tech University in Atlanta.

In 2012, Simon co-founded a life science startup called PHASIQ where she helped to develop bioassays for detecting graft-versus-host disease (GVHD) in cancer patients. Three of her patents resulted from the work she did at PHASIQ. Simon also helped to develop one of the world’s fastest super computers during her time working as a systems engineer for Intel. Before her work at Intel, Simon held the position of Senior R&D Engineer at Becton Dickinson (BD). During her time at BD, she held the position of U.S. President’s Emergency Plan for AIDS Relief (PEPFAR) Fellow. As part her duties in this position, Simon trained lab technologists in quality management practices in hospitals and labs in Kenya.

Simon has mentored people of all ages from children to young professionals. In February of 2020, she led Friendly House students in Portland, Oregon in a “Create Your Own” invention activity as part of her STEM outreach, which is geared toward sparking an interest the STEM field in young girls. Simon was chosen as an AAAS (American Association for the Advancement of Science) IF/THEN Ambassador to further her work of bringing more young women into the field of STEM. As part of her work with AAAS IF/THEN, she is part of a team that is developing a card deck which features 25 women in STEM who are engaged in dynamic scientific careers. Along with another IF/THEN Ambassador, Jasmine Sadler, Simon is working to launch the FEMME Pals (Female Engineering Mentors and Me) program which connects Black middle school aged girls with mentors in engineering as of the time of this writing in 2021. The program establishes these young Black girls in a pen pal relationship with mentors in engineering in which they receive guidance, letters, and care packages from a professional.

In 2017, Simon was recognized as a pioneering female innovator by the United States Patent and Trademark Office in their Women’s History Month Exhibit. Simon is featured in the 2021 AAAS If Then She Can Exhibit which displays the largest number of female STEM trailblazers. trailblazers.

In 2018, Simon published her first children’s book titled Abby Invents Unbreakable Crayons, a story about a young girl who meets an inventor and discovers that she too has the power to meet problems with solutions through inventing. Following this publication, Simon published her second children’s book titled Abby Invents the Foldibot in February of 2021.