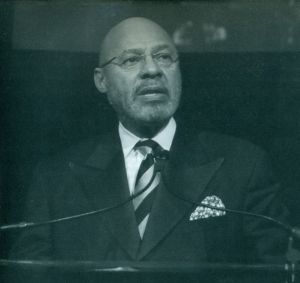 Although he has served as a public school teacher, attorney, and Michigan State Supreme Court Justice, Dennis Archer is best know as the Mayor of Detroit and the first African American to become president of the American Bar Association.

Born on January 1, 1942 in Detroit, Michigan, Dennis Archer graduated from Western Michigan University in 1965 with a B.A.  He taught disabled children in the Detroit Public Schools for five years while attending the Detroit College of Law.  Archer graduated with a J.D. degree in 1970 and began practicing law.

Dennis Archer was first appointed a Justice on the Michigan State Supreme Court in 1985.  He then won election to the Supreme Court post later that year and served until 1990. In 1993 he ran for mayor of Detroit, succeeding Mayor Coleman Young, the first black mayor of the city.  Archer was not popular with many Young loyalists and did not receive the majority of the African American vote.  Archer, however, eventually won over many of his critics and was elected to a second term in 1997 by a wide margin.

As mayor Archer promoted economic growth in the most impoverished areas of the city by persuading the federal government to make Detroit one of the first cities to receive federal Empowerment Zone status. He also initiated Detroit’s downtown “renaissance,” a controversial plan to develop the downtown area to lure businesses and residents back into the city.  He also promoted new downtown stadiums for the Detroit Lions football team and the Detroit Tigers baseball team.

Archer’s community development efforts brought him national attention and acclaim.  He was appointed to a position on the Board of Trustees of the U.S. Conference of Mayors and served twice as President of the organization.  In 2002, one year after leaving office as Mayor of Detroit, Archer was elected President of the American Bar Association.  He became the first African American to head the nation’s oldest and largest professional legal association.  Archer is also a member of Sigma Pi Phi and Alpha Phi Alpha Fraternities.