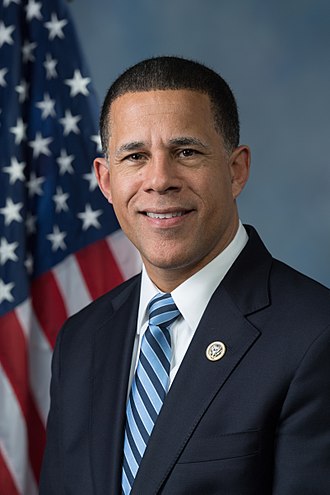 Anthony Brown served as lieutenant governor of Maryland from 2007 to 2015. Martin O’Malley, the former mayor of Baltimore, was his gubernatorial running mate. Prior to becoming lieutenant governor, Brown was elected to the Maryland House of Delegates to represent Prince George’s County. State Delegate Brown rose quickly, serving as Vice Chair of the powerful House Judiciary Committee and, later, as Majority Whip.

While in office as lieutenant governor Brown led several policy initiatives including improving and expanding health care, supporting economic development, helping victims of domestic violence, increasing access to affordable higher education, and providing Veterans with better services and resources. Brown was elected chair of the National Lieutenant Governors Association in July 2010, a position he held for one year.

Anthony Brown was born in Huntington, New York on November 21, 1961. Both his parents were immigrants. His father, Roy Herschel Brown, was a Cuban-born physician who was raised in Kingston, Jamaica. Roy Brown attended medical school in Zurich, Switzerland where he met his future wife, Lilly I. Berlinger. The couple were married and after he completed medical school they moved to the United States, settling in Suffolk County, New York. There they raised four sons and one daughter.

Upon graduation, Brown served in the U.S. Army as an Aviation Officer for five years. He was a helicopter pilot with the 4th Combat Aviation Brigade, 3rd Infantry Division in Europe. After completing a tour of active duty in Germany, Brown entered Harvard Law School and graduated in 1992, at which time he clerked for then Chief Judge Eugene Sullivan on the United States Court of Appeals for the Armed Forces. Brown continued as a member in the Army Reserve. Later Brown became a Judge Advocate Generals (JAG) officer, a military lawyer. He served in Iraq with the 353rd Civil Affairs Command as Senior Consultant to Iraqi Ministry of Displacement and Migration, from 2004 to 2005. While serving in Iraq he earned the Bronze Star Medal. He retired from the Army Reserve as a colonel in 2014.

Brown married Patricia Arzuaga in 1993, and they had two children, Rebecca, and Jonathan who was adopted. The couple divorced in 2009. In 2012, Brown married Karmen Walker. She is the widow of Prince George’s County police officer, Anthony Michael Walker, who died in a car accident.