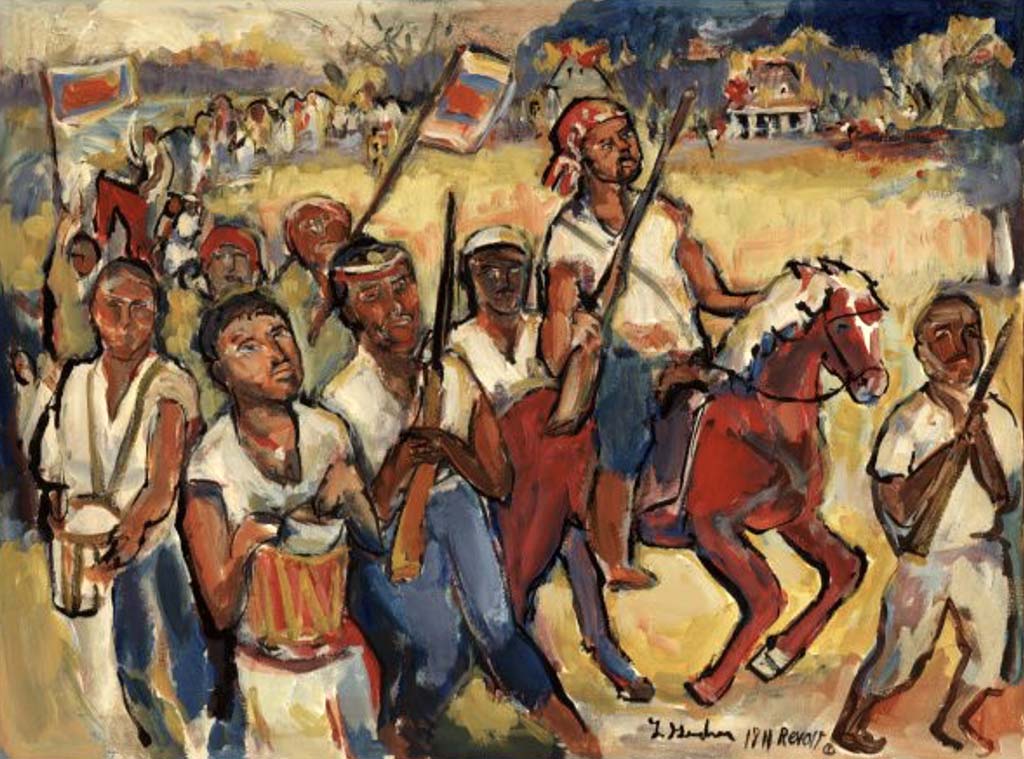 Andry’s Rebellion, also known as the German Coast Uprising, was a slave revolt that occurred in the Territory of Louisiana between January 8 and 10, 1811. The revolt, the largest servile uprising in United States history, was named after the owner of the plantation, Manual Andry, where the uprising originated. At its peak on January 10, it involved approximately 400 to 500 enslaved men and women along the east bank of the Mississippi River north of New Orleans. Led by a Saint-Domingue-(Haiti) born slave named Charles Deslondes, the uprising was inspired by the Haitian Revolution of 1791. Slaveholders also feared a Haitian-style uprising partly because blacks outnumbered whites in the region by a ratio of five to one, and in particular because of the large population of free blacks in the area that they assumed would help and support such a revolt.

The slave rebellion begin on January 8, 1811, at the Andry plantation in St. John the Baptist Parish when approximately 15 slaves attack plantation owner Manual Andry, wounding him. Despite his wound, Andry escaped and warned whites on surrounding plantations. Rebels also killed his son, Gilbert Tomassin Andry, around the same time.

The rebels then crossed into St. Charles Parish, headed to New Orleans and as they marched, their numbers grew. According to eye witness accounts at the time, the rebels marched in military style while beating drums, waving flags, and armed with pikes, hoes, axes with a few carrying firearms. Enslaved people from other plantations joined the Andry plantation rebels increasing their ranks to up to 500 people. While in St. Charles Parish they killed Jean Francois Trepangnier, another plantation owner. As the rebellion unfolded, terrified whites on plantations along the Mississippi River escaped for safety to New Orleans.

William C.C. Claiborne, the territorial governor at the time, called out the militia and imposed a curfew. General Wade Hampton, leader of the militia assembled two companies of volunteers, and eventually with the additional help of regular U.S. Army troops and Navy sailors, the rebellion was finally put down. Nearly 700 soldiers, more men than the number of rebels, broke the resistance on January 10. Rebel leader Charles Deslondes was captured the next day and brutally executed.

By the end of the uprising, the rebels had murdered two whites but more than ninety-five rebels were killed during the uprising and in the retaliation, making the suppression of this revolt the bloodiest in the history of the country. After the rebel slaves were captured, three tribunals were conducted by territorial officials at the Destrehan Plantation in St. John the Baptist Parish, and in Orleans Parish. On January 13, The Destrehan Plantation trial resulted in eighteen slaves being found guilty. All were later executed by firing squads and after their deaths, their severed heads were put pikes along the major roadway to New Orleans to intimidate other black slaves. After the rebellion authorities tightened the restrictions governing the activities of free blacks in Louisiana while freeing some loyal slaves who provided information or who, by serving in the militia, helped crush the uprising.