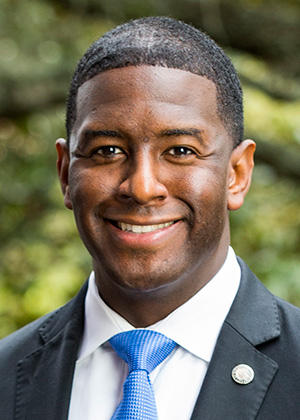 Andrew Demese Gillum served as the 126th mayor of Tallahassee, Florida, and was the Democratic nominee for Governor of Florida the 2018 election.

Gillum was born on July 26, 1979 in Miami, Florida. His father Charles was a construction worker, and his mother Frances was a school bus driver. Gillum was raised in Gainesville, Florida and graduated from Gainesville High School in 1998. He then attended Florida Agricultural and Mechanical University (FAMU). During his freshman year he engaged in protests and served as a senator in the Student Government Association. He later served as senate president and Student Government Association president from 2001 to 2002. He was the first student member of the FAMU Board of Trustees.

Gillum was a twenty-three-year-old political science major when he was elected to the Tallahassee City Commission in 2003 for a one-year term, making him the youngest member ever elected. He graduated the same year with his B.A. in political science and was recognized by the Congressional Black Caucus Foundation as an “emerging leader for 2003.” Gillum also served on the board of the Black Youth Coalition. He was elected to a four-year term with the commission in 2004 and was re-elected in 2008 and 2012.

From November 2004 to November 2005, Gillum served as Mayor Pro Tem for the city of Tallahassee. He also served as chairperson for the Capital Region Transportation Planning Agency from January 2005 through December 2005 and as lead commissioner for the Long Range Community based Target Issue Committee. During his decade as a City Commissioner, Gillum established the Digital Harmony Project, which provides computers and internet access to Nims Middle School and The Palmer Munroe Center, a safe haven for at-risk youth. In May of 2009, Gillum married R. Jai Howard, a fellow FAMU graduate. The couple have three children, Jackson, Caroline and Davis.

Gillum announced that he was running for mayor of Tallahassee in April of 2013. His opponents were Zach Richardson, Larry Hendricks, and write-in candidate Evin Matthews. In the primary, Gillum defeated Richardson and Hendricks, and Matthews withdrew from the race the following day. He then launched the Tallahassee Mayoral Fellows Program in partnership with Florida State University and FAMU. On November 21, 2014, Gillum was sworn in as the mayor of Tallahassee. His term was not without scandals, as Gillum was investigated under corruption and misuse allegations, but was cleared of all wrongdoings.

Gillum announced his candidacy for Governor of Florida in March of 2017, the first person to declare his intention to run as a Democrat. He won the Democratic nomination for governor in an upset victory over former congresswoman Gwen Graham and became the first African American nominee for governor in Florida. The campaign was marred by racial controversy. Republican nominee Ron DeSantis was accused of using the verb “monkey” as a dog whistle, and President Trump called Gillum a “thief.” Gillum lost a close election to DeSantis.

Gillum was named as a “2010 emerging leader” by Essence, was honored by FAMU 2012 125th anniversary as an Outstanding Alumni, and in 2014 was named an emerging “40 under 40” leader by The Washington Post.