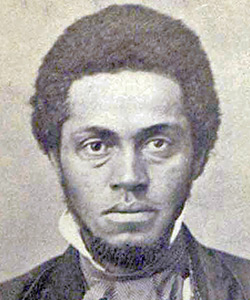 Osborne Perry Anderson was one of the five African American men to accompany John Brown in the raid on the federal arsenal at Harpers Ferry, Virginia (now West Virginia) in October 1859.  Anderson was a free-born abolitionist, born in West Fallow Field, Pennsylvania on July 27, 1830.  Along with John Anthony Copeland Jr., another member of the Brown raiding party, Anderson attended Oberlin College in Oberlin, Ohio.  He later moved to Chatham, Canada, where he worked as a printer for Mary Ann Shadd‘s newspaper, the Provincial Freeman.   In 1858, Anderson met John Brown and eventually became persuaded to join his band of men determined to attack Harpers Ferry.

One year after meeting John Brown on October 16, 1859, Anderson took part in Brown’s radical scheme to free the United States of slavery.  Like Brown and the other followers, Anderson believed that if the group seized weapons at Harpers Ferry and then marched south, they would create a massive slave uprising that would liberate all of the nearly four million African Americans in bondage.

Osborne Anderson was among the five followers of Brown who escaped capture when U.S. Marines attacked the arsenal to stop the raid.   He was the only African American to escape capture.  In 1861, Anderson, then safely in the North, wrote A Voice from Harper’s Ferry with assistance from Mary Ann Shadd, in which he described his role in the raid. He argued that many local slaves would have welcomed their liberation, and some, in fact, had helped Brown and his men.  Anderson’s account was the only one published by a member of Brown’s party and provided a rare, first-hand description of the events and the motivation of these abolitionists.

In 1864, five years after the Harpers Ferry Raid, Anderson enlisted in the Union Army, serving as a recruitment officer in Indiana and Arkansas.  Osborne Anderson died on December 13, 1872 in Washington, D.C. at the age of forty-two.

Osborne Perry Anderson, A Voice from Harper’s Ferry: A Narrative of
Events at Harper’s Ferry with incidents Prior and Subsequent to its
Capture by Captain John Brown and His Men