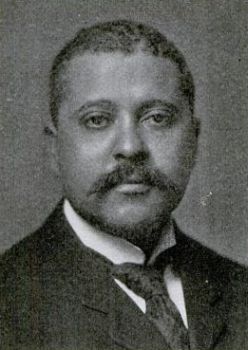 One of Booker T. Washington’s closest confidants, Charles William Anderson’s personal and professional relationship with African America’s most prominent educational leader spanned more than 20 years and helped influence Anderson’s political views and determine his public offices. Anderson, a Republican, was known primarily for his outstanding work as the first black appointed revenue officer for Manhattan as well as his political clout in the GOP.

Charles William Anderson was born on April 28, 1866 in Oxford, Ohio to Charles and Serena Anderson, natives of Ohio and South Carolina respectively.  Anderson attended public schools in Oxford and Middletown, Ohio before enrolling in the Spencerian Business College in Cleveland and later the Berlitz School of Languages in Worcester, Massachusetts.

In 1886 Anderson moved to New York City and soon afterwards entered Manhattan politics, making a name for himself as a “ward heeler,” a political operative who solicited votes for the Republican political machine in predominately African American neighborhoods of the city.  Like other ward heelers of the era, Anderson expected his work to produce opportunities for private gain.  Anderson’s success in garnering black votes for the Republican Party resulted in his being named president of the Young Men’s Colored Republican Club of New York County.  At the time he was 24.

After 1895 Anderson’s position as a Republican political leader and his relationship with Booker T. Washington began to coalesce. Once Washington became the nation’s most influential black leader following his Atlanta Compromise Speech in September of that year, he now had the ear of President William McKinley and soon to be president Theodore Roosevelt.  Once in office Roosevelt in 1905, on the advice of Washington, appointed Anderson the internal revenue collector for the lower half of Manhattan which included Wall Street and most of the Port of New York.  As federal revenue collector for the richest and most influential district in the U.S., Anderson was now one of the nation’s most powerful appointed officials.  Anderson repaid Washington by helping to ensure that black Republican elected and appointed officials supported the Tuskegee educator’s policies.

In 1915, under heavy pressure from Democratic president Woodrow Wilson, Anderson was forced to resign his post.  New York Governor Charles Seymour Whitman promptly named Anderson the chief of inspectors for the state Agricultural Department.  In 1922, however, Anderson returned to federal service when President Warren G. Harding appointed him to the position of revenue collector in the New York’s third district. While this position was less prestigious than his earlier post, Anderson continued to be influential in national black Republican circles. He held this office until his retirement in 1934.

Anderson married Virginia native Emma L. Anderson (formerly Bonaparte) in 1896. There are no records of them having children. Charles William Anderson died on January 28, 1938 in New York City.