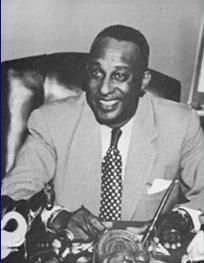 In 1935, Charles W. Anderson became the first black legislator in Kentucky and in the South since the Reconstruction.  He championed the cause of civil rights in Kentucky including greatly improving the access of African Americans to education during six terms as a legislator.

Anderson was born in 1907 in Louisville, Kentucky to Dr. Charles W. and Tabetha Murphy Anderson.  He attended Kentucky State College and Wilberforce University (B.A. 1927) and received a J.D. degree from Howard University in 1931.  In 1933 he passed the bar exam and started his own practice in Louisville.

In 1935 Anderson ran as a Republican for the Kentucky House of Representatives and won.  He served in the Kentucky Legislature until 1958.  One of his most important legislative accomplishments was the Anderson-Mayer State Aid Act which provided $7,500 annually to African American students to attend out of state colleges because Kentucky’s segregated college system could not accommodate all the blacks at the one all-black state school, Kentucky State College, in Frankfort.  He also passed bills improving public school facilities and legislated for a $100 education and travel fund for each black student who was forced to travel outside of his or her county to attend segregated schools.  Combating lynching in Kentucky, Anderson was credited with the repeal of the state’s public hanging law.

Anderson, who was longtime president of the Louisville National Association for the Advancement of Colored People (NAACP), was awarded the Lincoln Institute Key in 1940 for his service to the black community  He also served as president of the National Negro Bar Association chapter in Kentucky.  In 1946, he was selected as the Assistant Commonwealth Attorney in Kentucky’s 30th Judicial District, Jefferson County, which was the highest judicial position, held by any African American in the South at the time.  President Eisenhower also selected him in 1959 as the alternate delegate to the United Nations.

John Benjamin Horton, Not Without a Struggle: An Account of the Most Significant Political and Social-Action Changes That Have Occurred in the Lives of Black Kentuckians in the  Twentieth Century, (New York: Vantage Press, 1979); http://kchr.ky.gov/gallergreatblack.htm?&pageOrder=0&selectedPic=1; http://www.kyenc.org/entry/a/ANDER01.html;