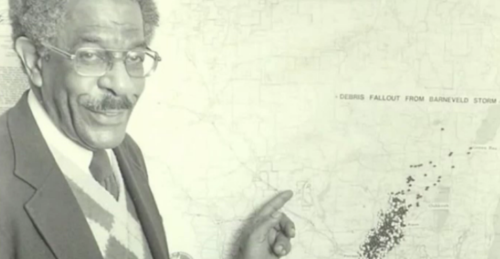 Charles E. Anderson
Fair use image
This entry is sponsored by Ceroasetta Simba

Charles Edward Anderson, meteorologist, Air Force officer, and weather officer, was born August 13, 1919 in the inner suburbs of St. Louis, Missouri on a farm in University City. Both his mother and father were from Mississippi. Anderson resided in St. Louis until he graduated the valedictorian of the Sumner High School class of 1937.

In 1941, Anderson earned his Bachelor of Science degree in Chemistry from Lincoln University, graduating third in his class. This is also where he met his future wife, Marjorie Anderson. After graduating he joined the U.S. Army Air Corps during World War II. The Army sent Anderson with 150 other cadets to the University of Chicago in Illinois to study meteorology while enrolled in the Army Air Force Meteorological Aviation Cadet Program. He earned his masters degree in meteorology from the University of Chicago in 1943.

While serving in the U.S. Army Air Force, Anderson was stationed in Tuskegee, Alabama as a weather officer with the 332nd Fighter Group otherwise known as the Tuskegee Airmen. Afterwards he became a squadron weather officer training fighter pilots across the country. In 1946 Anderson temporarily left the Air Corps to pursue high polymer chemistry at the Polytechnic Institute of Brooklyn.

From 1948 to 1961 Anderson worked at the Air Force Cambridge Research Center in the Chief Cloud Physics Branch. While working here Anderson earned his doctoral degree in meteorology from the Massachusetts Institute of Technology (MIT) in 1960, becoming the first African American in the nation to obtain a Ph.D. in that field. Then from 1961 to 1965 he worked in the Atmospheric Science Branch of the Douglas Aircraft Company in California. After this he served as the Director of the Office of Federal Coordination in Meteorology in Environmental Science Administration of the U.S. Department of Commerce from 1965 to 1966.

In 1966, Dr. Anderson was hired at the University of Wisconsin as Professor of Meteorology. In 1970 he was appointed Professor of Afro-American Studies and Chairman of the Meteorology Department at the university. In 1978 Anderson was promoted to Associative Dean. He remained part of the University of Wisconsin faculty until 1987. Then from 1987 until his retirement in 1990 he was a professor in the Department of Marine, Earth, and Atmospheric Sciences at the North Carolina State University. While there his contributions in a program focused on forecasting of severe storms garnered national recognition for the university.

Dr. Charles E. Anderson pioneered research and work that involved minimizing contrails of high-altitude aircrafts. As a scientist and more specifically as a meteorologist Anderson’s research had been focused on Cloud and Aerosol Physics, and Meteorology of other Planets. During his career he had been nationally acknowledged as a leading expert on severe storms and tornadoes. Dr. Charles E. Anderson died on October 21, 1994. He was 75 at the time of his death. He remained married to Marjorie Anderson until he died. He had no known children.