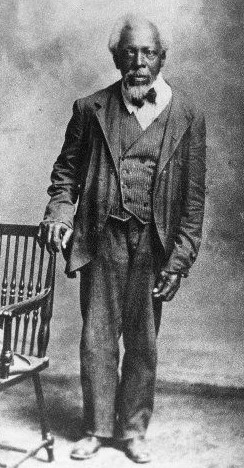 Prominent Texas landowner and businessman Anderson Bonner was born enslaved in Alabama around 1839. Not much is known about his younger years. Family history states that Bonner was given as a wedding present to the daughter of his former master, who moved him from Alabama to Arkansas. Anderson may have been “refugeed” in Texas during the Civil War when nearly 100,000 enslaved people from neighboring states were forcibly brought there by slaveholders to avoid the Union Army freeing them as it gradually occupied more of the Confederacy. If Bonner was in Texas by 1865, he—like other Lone Star state enslaved people—gained his freedom when Union General Gordon Granger and Union Troops under his command arrived in Galveston on June 19, 1865 and pronounced the end of slavery. That announcement became the basis for the Juneteenth holiday.

Sometime in 1865 Bonner married a woman known only as Eliza. Over time the couple had ten children, Anderson Jr, Newton, William, Ed, John, Andy, Mary, Martha, Charlie and Nash. Bonner arrived in Dallas, Texas, around 1870 with his brother Louis, and sister Caroline and they worked on a farm in the White Rock Creek area. Bonner by this time had acquired modest wealth. The 1870 Census lists his financial worth at $275 or approximately $5,456 in 2020 dollars. On August 10, 1874 Bonner purchased sixty acres of land, signing the deed with an “X”, as he never learned to read or write. He soon began leasing his land and the houses on it to cotton growing sharecroppers. With the money he earned, he bought more land. Bonner eventually amassed over two thousand acres of land in what is now North Dallas and the Dallas suburb of Richardson. The Medical City Dallas Hospital now sits on what was once the Bonner farm and the North Central Expressway divides Bonner’s original property.

Census records in 1900 reveal that six of the ten Bonner children still lived on the Bonner farm. Cotton, corn, and fruits were grown on the family farm worked mostly by Bonner, his children, and sharecroppers. Bonner’s sister, Caroline married into the Fields family, and one of her children married into the Giddings family, both prominent African American families of Dallas in the late 19th Century. In 1903, Eliza was killed in a oil lamp explosion in the family home. Sixty-four-year-old Bonner then married a woman named Lucinda, but the couple had no children.

Anderson Bonner passed away at the age of 82 in 1920. He was buried in White Rock Colored Union Cemetery (now White Rock Garden of Memories Cemetery), in Addison county. His descendants established the Anderson Bonner Endowment Scholarship that helps support Richardson Public School students who attend Prairie View A&M University. The first public school for black children in the North Dallas, the Vickery and Hillcrest school was renamed the Anderson Bonner School before its closing in 1955. The city of Dallas officially named the park west of Medical City Hospital, Anderson Bonner Park in 1976. The park consists of 44.1 acres of Bonner’s original land.