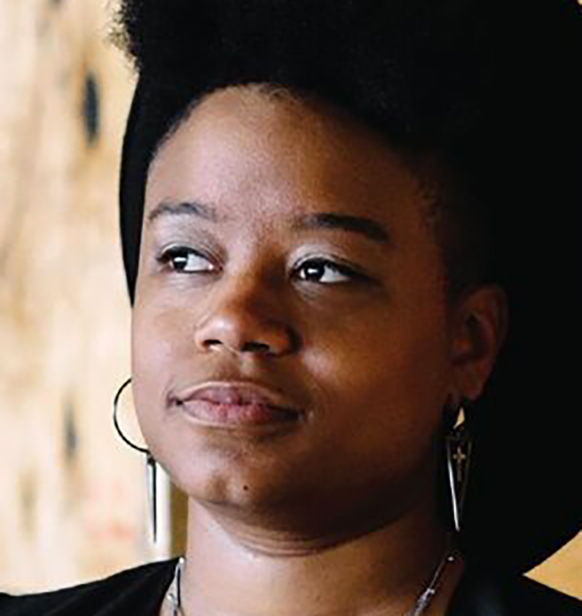 An alternative country blues singer, banjoist, guitarist, composer Amythyst Kiah was born in 1990 in Chattanooga, Tennessee but now resides in Johnson City, Tennessee. At an early age, she was encouraged and supported by her parents to play musical instruments. She started with the guitar and perfected it before moving on to other instruments.

In 2007 Kiah’s mother committed suicide. This traumatic experience for a 17-year-old came on the heels of her becoming a member of a small LGBTQ+ community in socially and politically conservative East Tennessee.

In 2006, Kiah enrolled in East Tennessee State University (ETSU), where she majored in the Bluegrass, Old-Time, and Country Music Studies program which was part of Appalachian Studies. During her tenure at the University, she transcribed archival materials regarding Bluegrass, Old-Time, and Country Music. Kiah received the Bachelor of Arts degree in 2012 but decided to continue her formal education. During her first year as a graduate student at ETSU, she performed at the Smithsonian Folk Life Festival in Washington, D.C. and the Winnipeg (Canada) Folk Festival. Kiah earned the Master of Arts degree in Liberal Studies in 2014 from East Tennessee State University.

In 2019, Kiah performed at the newly opened Smithsonian National Museum of African American History & Culture (NAAHC) Washington, D.C. and the Newport Folk Festival in Newport, Rhode Island. That same year, she released Wary+ Strange, her debut album on the Rounder Records label.  One year later in 2020 despite COVID-19 pandemic restrictions, she managed to collaborate with three other banjo players on the album Songs of Our Native Daughters which was nominated for a 2020 Grammy Award. The album was released on Smithsonian Folkways.

The confrontational single, “Black Myself,” featured on the album was also nominated for a Grammy for Best American Roots Song, and it won the Song of the Year at the Folk Alliance International Conference. This song exhibits Kiah’s raw feelings about the Transatlantic Slave Trade, part of the global slave commerce that transported millions of enslaved Africans to the Americas between the 16th and 19th centuries. Amythyst Kiah and her group, Chest of Glass performed at the annual Blue Plum Festival in Johnson City, Tennessee in 2016. In 2021, Kiah performed virtually on ABC Television Network’s “Jimmy Kimmel Live!”

A Southern Appalachian Black woman, Amythyst Kiah is one of the brightest new additions to the country music scene. She has performed as a guitarist, banjoist, and singer throughout the United States as well as Canada, the United Kingdom, and the Czech Republic.