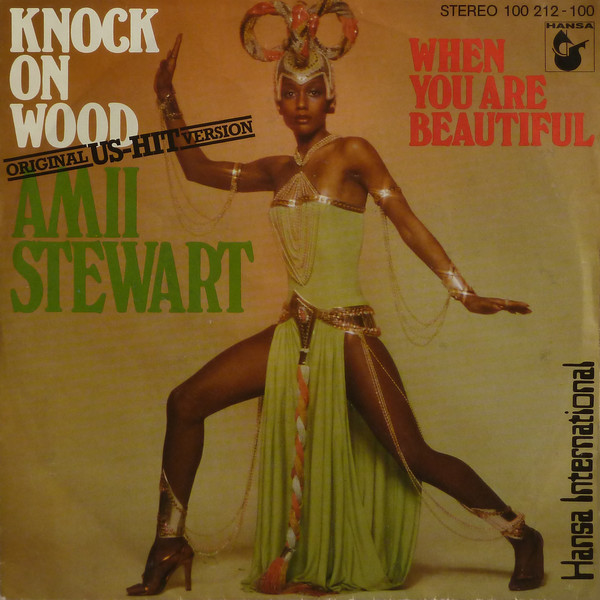 Amii Stewart was a popular American disco and soul singer best known for her 1979 hit song “Knock on Wood,” a disco remake of Eddie Floyd’s original 1966 R&B hit of the same name. Born January 29, 1956, in Washington, D.C. to Joseph Stewart II and Mary Stewart, she was named after her mom’s sister and in her words, “raised in a big, [strictly catholic, but] fun loving, country style family.”

At the age of four Stewart’s father enrolled her in singing and dancing lessons. Stewart changed the spelling of her first name because there was an individual named Amy Stewart already registered with the Actor’s Equity Association. She attended Howard University but left to study modern dance and ballet with the District of Columbia Repertory Dance Company. Stewart toured with numerous musical productions, including the stage production, Bubbling Brown Sugar (1975). In London’s West End Stewart met Barry Leng of Hansa Records who became her record producer. Her first recording with Leng was “You Really Touched My Heart” in 1978. In February 1979 Stewart released “Knock on Wood,” “Light My Fire/137 Disco Heaven,” both produced by Leng.

“Knock on Wood” peaked at number 1 on April 20, 1979 on the Billboard charts followed by “Light My Fire/137 Disco Heaven” which peaked at number 5 on June 16, 1979. “Knock on Wood” earned Stewart a Grammy nomination for Best Female R&B Vocal Performance at the 22nd Annual Grammy Awards in 1980. In 1985 Stewart relocated to Italy and recorded “Together, Together” a collaboration with Mike Francis, an Italian composer/musician. The song peaked at no. 1 in Italy and no. 12 in the U.S.

In 2000 Stewart resumed her acting career, playing Mary Magdalene in the rock opera Jesus Christ Superstar. In 2003 she starred in the musical, Lady Day, written and produced by her and centered on the life of Billie Holiday whom she portrayed. Stewart also worked as a goodwill ambassador for the Italian UNICEF, recording “Love Song” for the charity in 2006. Stewart collaborated with Ennio Morricone on the recording. All proceeds from the single went to the “Check Out for Children” campaign.

Stewart is single and has resided in Italy since 1985.