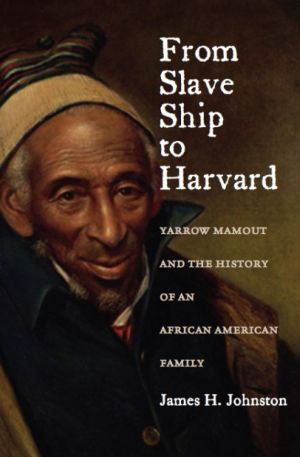 In the account below, attorney and historian James H. Johnston describes six generations of descendants of Yarrow Mamout, a Muslim slave made famous by Charles Willson Peale’s 1819 painting of him in Georgetown in the District of Columbia.  Johnston’s discussion of the evolution of his book, From Slave Ship to Harvard describes Mamout and his descendants.

From Slave Ship to Harvard is an extraordinary story about six generations of an African American family in Maryland.  Yarrow Mamout was the first.  The early American portrait painter Charles Willson Peale heard of him while visiting Georgetown and painted his portrait in 1819.  Although the painting is famous as one of Peale’s best and of an ex-slave to boot, no one seemed to notice what Peale said in his diary about Yarrow (his last name): He was Muslim and had come to America on a slave ship from Africa.  We know few names of the nine million individuals who were carried to the Americas on those slave ships, and yet with Yarrow, we have not only a name but also a face.  Portraits of slave ship survivors are exceedingly rare.  Only a handful of men and women rose above the terrible slave ship experience and had their portraits painted by major artists, as Yarrow did.  Equally compelling is the fact that in 1927 almost 175 years to the day that Yarrow stepped off the slave ship (1752), a descendant of his daughter-in-law’s family, a man named Robert Turner Ford, graduated from Harvard.

Research for the book started by a chance nine years ago.  It happened this way.  There is a second portrait of Yarrow in the Georgetown public library.  It was by the local artist, James Alexander Simpson.  I saw it and became curious as to who this man was.  I wasn’t planning to write anything, certainly not a book.  Because portraits of African Americans before the Civil War are so scarce, I expected to find volumes written about Yarrow and these two paintings.  Instead, I found nothing more than passing references in books and articles on other subjects. The only original research was in an unpublished manuscript by a local researcher, Eleanor Vaughn Cook, about the family that had owned Yarrow.  Otherwise, the man in the paintings was usually described simply as “ex-slave,” as though this was all that needed to be said about a black man of that era.  One art history scholar, writing in the 1940s and intending no disrespect, nevertheless referred to the Peale portrait as being of “a slouching, chuckling old Negro.”

Yet, the unfairness of history’s cursory treatment of Yarrow didn’t drive my research as much as the startling tale that began to unfold before me.  I found a copy of his signature on a deed at the National Archives and saw that it was in Arabic.  Similarly, while I knew that Yarrow was unusual in keeping his African name as a slave, I never expected to discover a white community in Maryland named Yarrowsburg where his daughter-in-law had been the midwife.

Of course, the difficulties of researching and writing about individual African Americans before the Civil War are enormous.  The old slave codes generally prohibited blacks, whether slave or free, from being taught to read and write.  As a result, few African Americans could record their own history.  But a few did.  Most whites didn’t write about blacks either.  But again, a few did.

Yarrow and his family were too exceptional to be ignored completely however, and thus they came to the attention of two white men who were writing about blacks.  In 1816, David Bailles Warden, published a book in Paris, A Chorographical and Statistical Description of the District of Columbia (Paris: Smith, 1816) explaining to Europeans what the new American capital was like.  One subject he covered was the role and life of African Americans in the city.  Naturally, Warden wanted to tell his readers about the colorful, eccentric, and legendary Yarrow Mamout.  Warden even quoted, and saved for posterity, a sample of Yarrow’s poetic pattern of speech.  Reading the paragraph is almost like listening to a recording of the man.  A few years later, portrait painter Peale came to Georgetown.  He too heard about Yarrow.  Although Peale usually was paid for his work, he was so intrigued with Yarrow that he painted his portrait without compensation and kept it for himself.  Peale had heard that Yarrow was 143 years old (he was actually 83) and owned bank stock.  But Peale did more than paint the portrait.  In the two days he spent with Yarrow, he talked to him and others and got his life story, which he recorded in his diary.  That diary provided me with the clues I needed to reconstruct Yarrow’s life.

At about the same time that Peale was scribbling in his diary about Yarrow, a man named Jacob Englebrecht in Frederick, Maryland began his own diary.  In it, he recorded what was happening there to both blacks and whites.  He recorded births, deaths, marriages, and whatever else interested him.  He mentioned the Hillman family, a prominent black family in the town in those early days.  As chance would have it, Yarrow’s niece, Nancy, married into the Hillman family, and so Englebrecht left a record about her husband and son.

Yarrow and the Hillmans received mere mention in these works, but it was enough.  The information could be paired with government records, like censuses and manumissions, to build connections and a chronology.  To this, other scraps were added.  For example, in his book Warden told the quaint story that on Christmas morning Yarrow went around to the homes of wealthy white families in Georgetown and fired off his shotgun under their windows as a signal for his “dram.”  This dram might have been alcohol, which seems unlikely since Peale wrote that Yarrow did not drink of spirits, but more likely money because that would tie in with an account by another writer.  He said that on Christmas Eve, blacks in Georgetown went around to the homes of their white friends caroling.  Then, on Christmas morning, someone went back to those same families to collect gifts of money.  Thus, two seemingly unrelated sources seem to come together in a beautiful, touching, personalized snapshot of one of the better moments in race relations in Yarrow’s day.

Anyone who has worked on African American genealogy knows the importance of manumission records.  These grants of freedom were typically recorded in real estate books, prized possessions which most counties have protected and preserved from fire, flood, wind, and war. But there are limits to the usefulness of manumissions.  Too often, they only mention a first name, such as Negro Nancy.  Sometimes it is safe to guess that if Negro Nancy was freed by William Smith, then she took his last name and became Nancy Smith, but this wasn’t always the case.  In any event, manumission records aren’t the only ones that have the names of slaves and ex-slaves.  Wills, inventories of estates, and estate sales of slave owners do too.  They often contain the names and dispositions of the deceased’s slaves.  Even more intriguing, when I looked at such records for colonial Maryland, I found that far more slaves kept their African names than I had been led to believe.  And, in some instances, by comparing those names with naming conventions in Africa I was able to tell where the slaves came from.  This approach led me to conclude that Muslim slaves from Guinea were working at Hungerford’s Tavern in Rockville, Maryland, in Yarrow’s day and that he probably got together with them on occasion.

Oral histories also proved important even though I was researching people who died almost two hundred years ago.  These oral histories, about black men and women, came from both whites and blacks.  Stories about Yarrow’s son and daughter-in-law have been handed down through generations of white families in Yarrowsburg whereas black residents there never heard of them.  Similarly, even today, the white families around Yarrowsburg have stories about where slave quarters were, about slave graves on the farms, and about how long-dead neighbors treated their slaves.

Of course, oral histories have to be taken with a grain of salt and compared with the available documents.  The oral history among the Turner-Ford family is that their great grandfather, Simon Turner, was descended from the Nat Turner who led the slave revolt in Virginia.  The oral history proved not to be exactly true, but there was an element of truth in it.  And this illustrates the problem with oral histories.  Unlike contemporaneous documents, they can get twisted as they are repeated time and again over generations.  Still, they cannot be dismissed lightly and not without contrary evidence.

A final technique worth mentioning is not to lose sight of the forest for the trees.  That is, few things are 100% certain.  A missing document or link is not a reason to give up. For example, I found nothing to say that Yarrow’s son, Aquilla, was taught to read.  Indeed, it is clear that teaching African Americans to read was frowned upon in Maryland at this time and a criminal act to be punished by flogging in states in the South like Georgia.  Yet someone must have taught Aquilla to read.  Why else would there be “a lot of books” in the inventory of his estate?

In sum, there are unquestionably immense hurdles in tracing black ancestry back into the period of slavery, but the task isn’t always impossible.  I was lucky because I started with Yarrow, a man who kept a distinctive African name, and I had Warden’s and Peale’s writings about him.  However, many other things that I learned came from government records and oral histories that are not unique to this one Maryland family.  In point of fact, it was my good fortune that history overlooked such a major story and left it for me to tell.