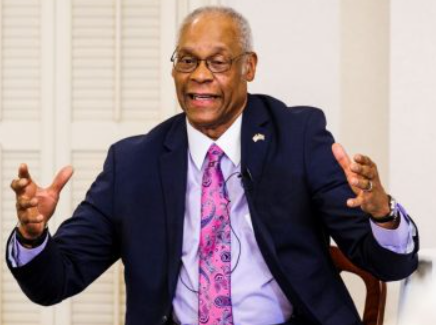 On November 16, 1999 President William Jefferson (Bill) Clinton nominated Delano Eugene Lewis to be the United States Ambassador to South Africa.  Lewis was confirmed by the U.S. Senate and served in that capacity from 1999 to 2001.  Having spent much of his adult life to that point as an attorney and businessman, Lewis was a non-career appointee.  Lewis had also held leadership roles with the U.S. Peace Corps and National Public Radio.

Delano Eugene Lewis was born on November 12, 1938 in Arkansas City, Kansas.  He was the only child of Raymond Ernest Lewis and Enna L. Lewis.  The family moved to Kansas City, Kansas where Lewis graduated from Sumner High School in 1956. He then earned a Bachelor of Arts in Political Science and History at the University of Kansas in 1960, and a law degree from Washburn University School of Law in Topeka, Kansas in 1963. Lewis and his wife, the former Gayle Carolyn Jones, were married in 1960. They have four sons: Delano Jr., Geoffrey, Brian, and Phillip.

After graduation, Lewis went to work as an attorney in the U.S. Justice Department and later in the Office of Compliance in the Equal Employment Opportunity Commission (EEOC).  From 1966 to 1969 he was associate director and country director for the Peace Corps in Nigeria and Uganda.  In the early 1970s Lewis became involved in the campaign to establish home rule for Washington, D.C., and he chaired the Voice of Informed Community Expression (VOICE), which led the effort.  Congress approved home rule for the District in 1973. He later ran unsuccessfully for a seat on the new Council of the District of Columbia.

In 1973 Lewis began his corporate career as the public affairs manager for the Chesapeake & Potomac Telephone Company, eventually becoming its CEO in 1990.  He also served terms as President of the Greater Washington Board of Trade and the City National Bank of Washington.  In 1998 Lewis became the first African American to serve as President and CEO of National Public Radio.  By that point Lewis also served on the board of directors of Apple Computer, Black Entertainment Television (BET), Colgate-Palmolive, Halliburton, and Eastman Kodak.

Because of his extensive experience in the telecommunications industry, in 1994 President Clinton named Lewis a member of the newly formed National Information Infrastructure (NII) Advisory Council.  This 27-member body was the first Federal agency charged with helping to determine the future course and shape of what came to be known as the information superhighway (the Internet).

When 61-year-old Lewis attempted to retire to Las Cruces, New Mexico, President Clinton asked him to serve as U.S. ambassador to South Africa.  At the end of his tenure he returned to Las Cruces where he started a consulting business, Lewis and Associates.  In 2006 Lewis, a member of Alpha Phi Alpha Fraternity, was named a senior fellow at New Mexico State University, and the following year became the founding director of the university’s International Relations Institute.