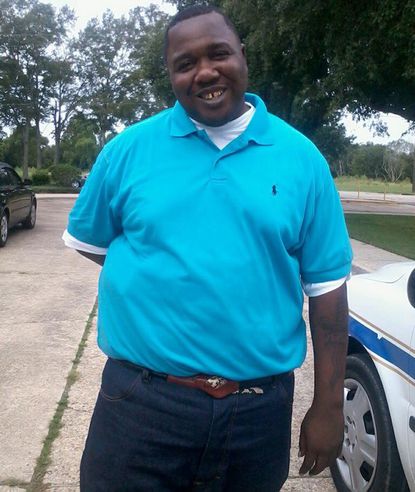 Alton Sterling, a victim of a police killing, was born on June 14, 1979, in Baton Rouge, Louisiana. He worked as a CD vendor, had five children, and lived in the Living Waters Outreach Ministries shelter in Baton Rouge before his death. He was known by residents as someone who loved to cook for everyone at the shelter. Sterling had also a criminal record that included violent offenses from previous years. He served five years in prison after a 2009 incident in which he resisted arrest and fought with the arresting officer.

On July 5, 2016, police received an anonymous tip that a man in a red shirt was selling CDs outside a grocery store and threatening another individual with a gun. When officers arrived, they confronted Sterling, forcing him to the ground and pinning him down by kneeling on his chest and thigh. Officer Blane Salamoni claimed Sterling was reaching in his pocket for a gun, fired six shots at close range. He was pronounced dead from multiple gunshot wounds to the chest and back by EMS staff who arrived on the scene.

According to the witness videos, Sterling did not pull a gun or threaten the officers. Moreover, bodycam footage of the officer who shot Sterling shows that seconds after Salamoni came to the aid of another officer, Howie Lake, who was in the process of trying to restrain Sterling, Salamoni drew his gun and threatened to shoot Sterling if he moved. The store’s owner, Abdullah Muflahi, confirmed that Sterling, known in Baton Rouge as “CD Man,” had begun carrying a gun only a few days before the incident, citing recent robberies of other CD vendors.

The U.S. Department of Justice opened a civil rights investigation on July 7, 2016, and announced on May 2, 2017, that it would not file charges against officers Lake and Salamoni, Louisiana Attorney General Jeff Landry later announced in March 2018, after reviewing the evidence, that no charges would be filed against the officers because they had acted “reasonably and justifiably.” On March 30, 2018, nearly two years after Alton’s death, Officer Blane Salamoni was fired for violating the use of force policy, and Officer Howie Lake was suspended for three days for losing his temper.

The Black Lives Matter Movement held a vigil for Alton Sterling in Baton Rouge, a day after the 37-year-old was shot and killed. Outside the supermarket where Sterling was shot, a crowd of mourners chanted “We love Baton Rouge.” People held up balloons and signs demanding justice. The hashtag #AltonSterling was all the rage on Twitter during the vigil, and nearly 69,000 people tweeted about his death.

In 2021, Sterling’s family accepted a $4.5 million settlement with the City of Baton Rouge. Under the agreement, Sterling’s children will initially receive $1 million from East Baton Rouge Parish’s insurance reserves, with the remainder paid in equal installments over the next four years from the annual operating budget. Alton Sterling is survived by his five children, Alton Sterling Jr, Josiah Williams, Journee Williams, Cameron Sterling, and Na’Quincy Pierson; his aunt, Sandra Sterling, the mother of three of Sterling’s children; Andricka Williams; and other family members.