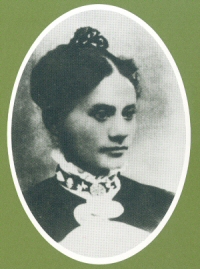 Born 1855 in Trenton, Kentucky, Josephine Leavell was an accomplished pianist, organist and music teacher before marrying prominent Baptist minister, Rev. Allen Allensworth, in 1877.  From 1886 to 1906, Josephine lived with her husband, one of the few African American chaplains in the U.S. Army, and two daughters in remote postings, from Fort Supply, Indian Territory, Oklahoma to Fort Harrison, near Helena, Montana, with many postings in between.  During these years, Josephine made an elegant home, performed as organist during her husband’s chapel services, and raised her daughters, according to Delilah Beasley’s Negro Trail Blazers of California (1919), in the ways of “the old school of (Negro) aristocracy.”

Following the Colonel’s retirement in 1906, Josephine and her husband led the founding of Allensworth, an all-black settlement about 40 miles north of Bakersfield, California, now preserved as a State Historic Park.  In Allensworth, Josephine helped found the Women’s Improvement League, sat on the school board, and donated the property for the Mary Dickinson Memorial Library, the public library named for her mother.  After her husband was killed in 1914 by a reckless motorcyclist in Monrovia, Josephine remained in Allensworth until 1922, then moved to Los Angeles to live with her daughter Nella, son-in-law Louis Blodgett, (the most successful black contractor in the city), and their children, until her death in 1938.