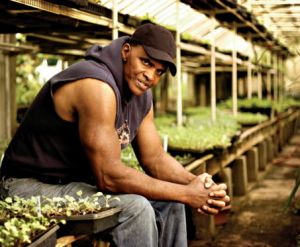 Will Allen, son of a sharecropper, former professional basketball player, ex-corporate sales leader and now farmer, is recognized as one of the preeminent thinkers of our time on agriculture and food policy. Allen is the founder and CEO of Growing Power, Inc., a farm and community food center in Milwaukee, Wisconsin. He is widely considered the leading authority in the expanding field of urban agriculture.

Will Allen was born on February 8 in 1949 in Rockville, Maryland.  He grew up on a small farm where his parents had moved after sharecropping in South Carolina. He attended the University of Miami at Coral Gables, Florida where he played basketball, graduating in 1971 with a B.A. That same year he turned professional and joined the Baltimore Bullets but never did play in the National Basketball Association (NBA). He briefly played in the American Basketball Association (ABA) with The Floridians. The remainder of his professional basketball career was spent in Belgium.

After his basketball career ended in 1977, Allen moved to Milwaukee where his wife’s family owned some farmland just south of the city in Oak Creek. Allen married his college sweetheart, Cindy Bussler; they have a daughter named Erika. He farmed primarily for his family and sold the excess at farmer’s markets. While farming, he also joined Kentucky Fried Chicken as a District Manager. In 1987, he joined Proctor & Gamble as a salesperson. He remained with the corporation until 1993.

Will Allen’s career trajectory took a radical turn when he purchased a derelict plant nursery in foreclosure and turned it into what is now Growing Power, Inc. Allen established the organization to reach out to youth who needed job opportunities and the chance to help feed their communities. He designed programs to bring together the elderly, the young, the amateur farmer, and professional agricultural specialists in order for them to problem solve issues ranging from soil health to food distribution, and from marketing to leadership development.

At Growing Power, which has now become a model for community food projects across the nation and around the world, Allen promotes the belief that all people, regardless of their economic circumstances, should have access to fresh, safe, affordable and nutritious foods at all times. Using methods he has developed over a lifetime and pulling memories from his parents in Rockville, Maryland, he now trains community members to become community farmers, assuring them a secure source of good food without regard to political or economic forces. He has also introduced agriculture to a younger generation of urban residents while reconnecting older citizens of Milwaukee to their rural Southern backgrounds.

In 2008 Allen was named a John D. and Catherine T. MacArthur Foundation Fellow and was awarded a prestigious foundation “genius grant” for his work. He was only the second farmer ever to be so honored. Allen also is a member of the Clinton Global Initiative, and in February 2010 he was invited to the White House to join First Lady Michelle Obama in launching “Let’s Move!”, her signature leadership program to reverse the epidemic of childhood obesity in America. In May 2010 Time Magazine named Will Allen to the Time 100 World’s Most Influential People.