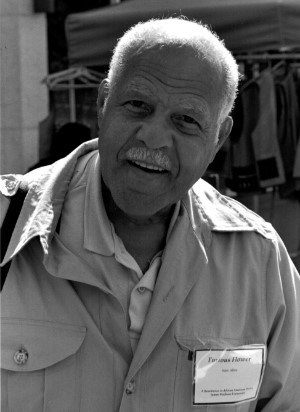 Samuel W. Allen was an accomplished lawyer, translator, academic, and poet who wrote his African-inspired poetry under the pseudonym Paul Vesey. He was one of the first black poets to achieve significant recognition in Europe and the United States.  Allen was born in Columbus, Ohio on December 9, 1917 to college-educated parents and attended Fisk University in Nashville, Tennessee, where majored in sociology. While at Fisk, however, he also studied writing with Harlem Renaissance novelist and critic James Weldon Johnson. After his graduation with high honors in 1938, Allen entered Harvard Law School and earned his J.D. in 1941.

With the United States’ entry into World War II, Allen was drafted in 1942 and served in the segregated U.S. Army in the Adjutant General’s Corps where he eventually rose to the rank of lieutenant. Immediately after the war, he was employed in New York City, New York as deputy assistant district attorney and then in 1947 he enrolled in New York’s New School for Social Research with his G.I. Bill benefits but left for Paris, France in 1948.

In France, he took literature classes in the Alliance Françoise cultural organization, studied at the Sorbonne, and met African American writers James Baldwin, Langston Hughes, and Richard Wright. In 1949, he published his first poems in Wright’s journal, Présence Africaine or “African Presence.” Wright encouraged Allen to be more involved with the journal and gradually transferred more editorial responsibility onto him. In 1951 Allen translated Orphee Noir by French philosopher Jean-Paul Sartre and, later, Leopold Senghor‘s Anthologie de la Nouvelle Poesie Negre into English. During this period, from 1951 to 1955, Allen held numerous jobs with the US Armed Forces as a historian, claims officer, and civilian attorney in Germany and France.

While working for the Armed Forces, Allen became a published author.  In 1956, Allen published his first poetry book, Elfenbein Zãhne or “Ivory Tusks,” in Germany.  In 1959, he published “Negritude and Its Relevance to the American Negro Writer,” through the Présence Africaine, and co-edited, introduced, and contributed to Pan-Africanism Reconsidered in 1962.

After he returned to the United States in 1956, Allen continued his legal career as a private practice attorney in Brooklyn, New York from 1956 to 1958 and by teaching law at Texas Southern University from 1958 to 1960. Then, under the Kennedy and Johnson Presidential administrations, he served in Washington, D.C. as assistant general counsel in the U.S. Information Agency from 1961 to 1964, and chief counsel in the U.S. Community Relations Service from 1965 to 1968.

After his federal government appointments, Allen began a 13-year academic in 1968 when he was appointed to the humanities faculty at Tuskegee Institute in Alabama. His new career included prestigious visiting professorships and writer residencies at other institutions, a volunteer writing instructor assignment in a Massachusetts prison, and a professorship in Boston University from 1971 to his retirement in 1981. During these years, Allen published his first U.S. Publication, Ivory Tusks and Other Poems in 1968, and later published Paul Vesey’s Ledger in 1975. After his retirement, Allen remained an active writer and lecturer. His fourth and final book, Every Round and Other Poems, appeared in 1987.