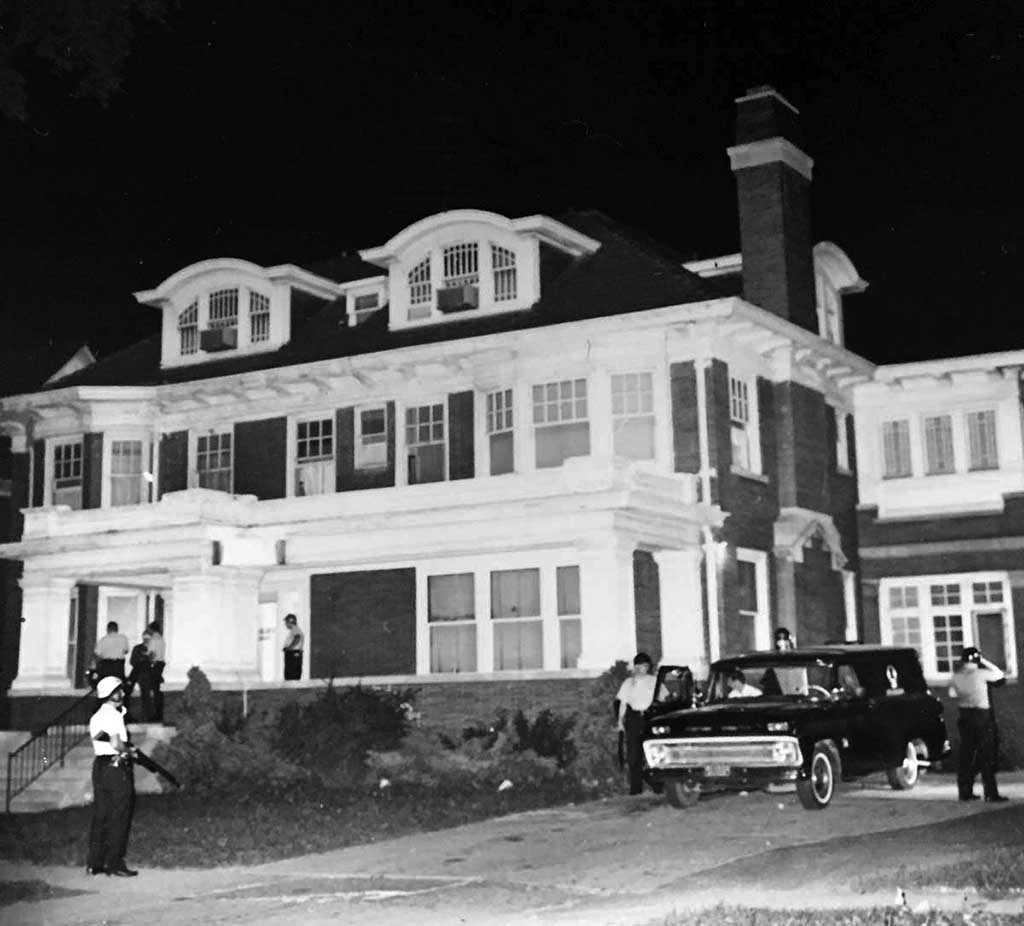 The Algiers Motel Incident occurred in Detroit, Michigan on July 25, 1967, two days after the Detroit Race Riot began. The incident started when Army National Guardsman Ted Thomas reported hearing gunshots at the Algiers Motel Annex. Detroit Police, Michigan State Police, and other National Guardsmen came to the scene to find what they thought was a sniper. Three young black men, Carl Cooper, Michael Clark, and Lee Forsythe, were in a room in the motel, listening to music with two white women from Ohio, Juli Hysell and Karen Molloy, when Cooper fired a starter pistol shooting blanks out the window. When authorities thought they were under sniper attack, they returned fire.

Detroit Police, State Police, and National Guard members rush into the motel annex to locate the sniper.  According to later testimony, Detroit police officers most likely shot and killed Cooper who ran downstairs with his pistol when they entered the building.  Detroit police later would claim that they found Cooper already dead in a first-floor room when they entered the building.  No one was ever charged with the death of Carl Cooper, the youngest victim, who was 17.

Clark, Forsythe, Hysell and Molloy, and other guests including 19-year-old Aubrey Pollard, a 26-year-old Vietnam veteran Robert Greene, 18-year-old Larry Reed, lead singer for the Rhythm and Blues group the Dramatics, and band road manager, 18-year-old Fred Temple, were rounded up by Detroit police officers and faced against a downstairs hall wall.  Hysell and Molloy were pulled out of the lineup and stripped naked.  At some point Melvin Dismukes, a black security guard for a nearby store, entered the annex while the police held the guests against the wall.

The next youth to be killed, Pollard, was shot and killed by officer Ronald August after he took him into Annex Room A-3.  August later admitted to the killing but claimed it was in self-defense. The third person to die, Temple, was shot by Detroit Police Officer Robert Paille who also claimed he killed him in self-defense. Despite the three deceased bodies in the Motel Annex, the Detroit police officers on the scene, Paille, August, and David Senak, did not report any of the deaths to the Detroit Police Homicide Bureau as required.  Instead they left the annex after demanding that the survivors keep quiet about the incident.

The next day Charles Hendrix, who provided security for the motel, found the bodies and reported the deaths to the Wayne County Morgue which in turn called the Detroit Police Homicide Bureau. In 1969, Dismukes along with Paille, August, and Senak were charged with murders.  Dismukes went to trial first and was acquitted by an all-white jury.  Paille was charged with first-degree murder in Temple’s death but his case was dismissed when the judge invalidated his confession because he had not been read his Miranda rights. August, who was charged with first-degree murder in the death of Pollard, was acquitted by an all-white jury in Mason, Michigan despite his confession. Senak was also found not guilty at that trial.

Despite the not-guilty verdicts, the Algiers Motel Incident continued to garner public attention.  In 1967 and 1968 investigative reporter John Hersey interviewed survivors, members of the victim’s families, and the policemen involved.  Those interviews became the basis for his 1968 book The Algiers Hotel Incident. The Pollard and Temple families filed lawsuits against the police officers which resulted in modest settlements and the three officers left law enforcement.  The Algiers Motel was renamed the Desert Inn soon after the incident and eventually demolished in 1979.

The 2017 film Detroit, produced and directed by Kathryn Bigelow and starring John Boyega as Melvin Dismukes and Algee Smith as Larry Reed, told the story of the Incident set against the backdrop of the 1967 Detroit Riot.