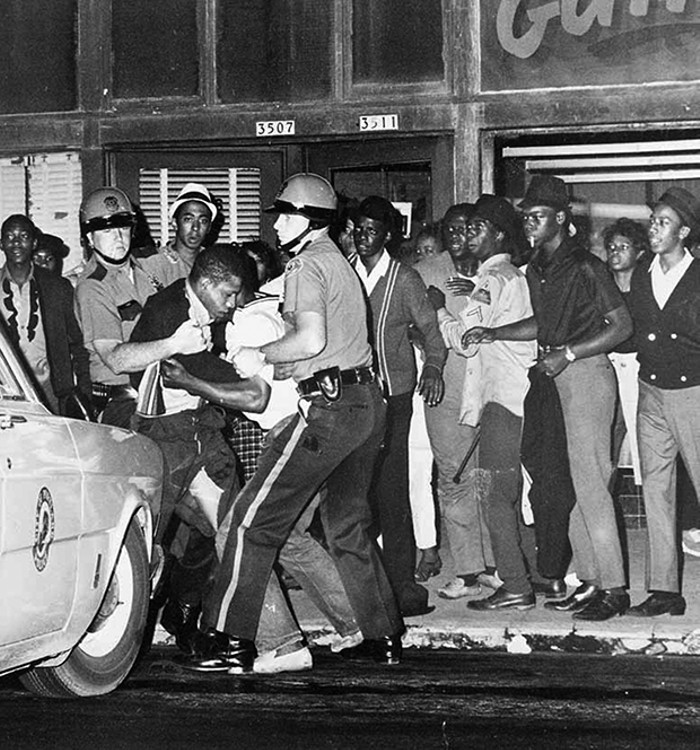 The 1967 Albina Riot in Portland, Oregon, occurred during a summer in which over 150 other cities were experiencing civil unrest. Underlying resentments and racial tensions that had been mounting for decades were a common theme in these urban uprisings.

Blacks in Oregon were consistently the target of discrimination from the state and its citizens upon the inception of its statehood. State Constitution provisions that disallowed blacks to live in or own property in the state, although made null and void by the 14th Amendment, nonetheless remained on the books by popular demand until 1926. Popular demand also prevented the Constitutional ban on black voting (although unenforceable) to remain on the books until 1959, one century after Oregon entered the Union. Beginning in the 1930s, African Americans in Portland were redlined into the Albina neighborhood. To make circumstances worse, this neighborhood was subjugated to an increased presence of law enforcement which only contributed to rising racial tensions.

The Albina Riot was set into motion on July 30th, 1967. On that day about 100 people gathered in Irving Park to attend events and hear speeches. Eldridge Cleaver, the Black Panther Party Minister of Information, was also expected to make an appearance at the park. There was a heightened police presence in the area because local law enforcement was anticipating a riot. Their presence, in addition to Cleaver not appearing, resulted in increased tensions. To make matters worse, one speaker at the Irving Park event used rhetoric inciting violence and this enticed the crowd.

At 5:18 p.m. some African American youths began throwing bottles and rocks at a store window near the park. Soon after, a handful of youths attacked a white park employee. By 6:30 p.m. the unrest had spread out into the neighborhood. Numerous stores had their windows broken and the police closed off a 30-block area due to rocks being thrown at motorists. Two hundred police officers were called into the area and another 200 were on standby. Later that night arsonists set fires burning multiple buildings. Tom McCall, the state’s governor, arrived in Portland around 9:00 p.m. and assessed the situation with Terry Schrunk, the city’s mayor. The Oregon National Guard was on notice in case events escalated. Unrest continued into the night but subsided the next day. The civil disturbance resulted in 115 arrests as well as $50,000 worth of damage.

The aftermath of the riots led to mixed public reactions. Some in the city praised the police reaction and were critical of the violence by young African Americans. Law enforcement ramped up surveillance of the Albina neighborhood and were on the lookout for local civil rights organizers or those who publicly criticized police. Others, mostly civil rights leaders, while condemning the violence, also condemned the underlying reasons which caused it and demanded action to alleviate those conditions.