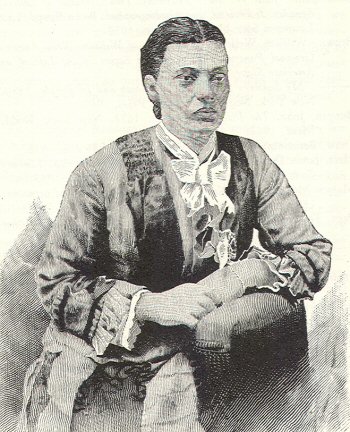 Octavia Victoria Rogers Albert, a 19th century author and religious leader, was born in December 25, 1853 in Oglethorpe, Georgia into slavery.  She draws inspiration from that experience for her book The House of Bondage which was published after her death by her husband and daughter in 1890.  In 1870, Octavia enrolled in the Atlanta University.  Three years later she began teaching in Montezuma, Georgia.  There she met A.E.P. Albert and the two married in 1874.  They had one daughter named Laura T. Albert.

Octavia Albert always had a strong religious faith.  In Oglethorpe, she attended the African Methodist Episcopal (AME) Church, which was under the ministry of former Congressman and prominent political activist Bishop Henry M. Turner. There she decided to devote her life to the church and her faith.   In 1877, A.E.P. Albert was ordained as a minister in the Methodist Episcopal Church.  When he was ordained, she converted to Methodism and was baptized by him in 1888 after the family had moved to Houma, Louisiana.  It was not common practice to take a professional position because of her husband’s standing and for the first time in her adult life, Octavia Albert became a full-time housewife, mother.

In Houma, Albert was known as a community and religious leader.  Often, members of the community gathered at her home to share stories of their lives as slaves.  As she became acquainted with the former slaves who shared their stories she decided to collect them in the book The House of Bondage.  Rogers, a skilled interviewer and writer, was able to convey on paper the powerful recollections of these former slaves.  Also The House of Bondage was one of the first collections of the stories and memories of former enslaved people.

Although Albert’s book was based on a series of interviews with over a dozen ex-slaves, the main dialogue was with Charlotte Brooks who was torn unwillingly from her parents and children when they were sold elsewhere in the South.

The interviews in the book, recorded over 15 years after the end of slavery, documented vivid accounts of harsh treatment towards Louisiana slaves and the negative effects on the livelihood of ex-slaves after their emancipation.  The House of Bondage also recorded how some ex-slaves were able to progress since Emancipation and become part of society.  Albert claimed her goal in writing The House of Bondage book was to tell the story of ex-slaves as well as to “correct and to create history.”  Octavia Victoria Rogers Albert is thought to have died around 1890 in Houma, Louisiana.