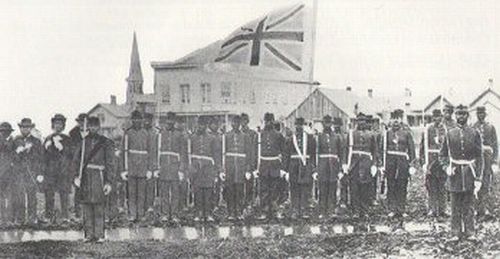 The Underground Railroad which fugitive slaves followed from the antebellum South to Canada is now a well-known story. But what of those who returned?  In his ongoing research, University of Texas at El Paso historian Adam Arenson explores this little-known aspect of nineteenth- century African American history: the return of blacks from Canada to the U.S. after the Civil War.

Mifflin Wistar Gibbs recalled his return to the United States with ambivalence. Born free in Philadelphia in 1823, Gibbs had sought his fortune among the 49ers in California, but by 1858 he had found the hardening racial attitudes of California and the rest of the United States suffocating. Gibbs had gone to Victoria, British Columbia, where he was elected to the City Council in 1866. Content and prosperous, Gibbs nevertheless was enthralled by the Emancipation Proclamation, the defeat of the Confederacy, and the promise of Reconstruction. In 1870, he decided to return south.

“En route my feelings were peculiar,” Gibbs wrote later in his memoir, recalling the moment. “A decade had passed, fraught with momentous results in the history of the nation. I had left California disfranchised and my oath denied… I was returning, and on touch of my country’s soil to have a new baptism through the all-pervading genius of universal liberty. I had left politically ignoble; I was returning panoplied with the nobility of an American citizen.”

Testing the country’s transformation, Gibbs visited his brother, Jonathan Gibbs, the first African American secretary of state in Florida, and attended an African-American political convention in Charleston, South Carolina. Inspired by what he saw, Mifflin Gibbs moved to Arkansas, where he became the first African American elected as a municipal judge. He later served in numerous Republican administrations, and concluded his memoir, published in 1902, with a description of his visit with President Theodore Roosevelt.

Despite these personal successes, a doubt remained in Gibbs’ mind, one that rang out from the moment of his return to the United States. “The [Reconstruction] amendments to the Constitution…born in the seething cauldron of civil war…had been passed,” Gibbs wrote, “but was their inscription a record of the crystallization of public sentiment?” Would the promise of equal rights hold in the United States, for those born enslaved, those fugitives for freedom, those who returned to work for its promise?

As Gibbs witnessed in the late nineteenth century, Reconstruction’s new birth of freedom waxed and waned. Like the thousands of other African North Americans returning during the Civil War and Reconstruction, Gibbs came armed with the power of comparison: When struggling for social equality and access to political participation in the United States, these men and women could consider their experiences in Canada as they formulated notions of freedom after slavery.

Canada has been understood as a mid-nineteenth century Promised Land for slaves escaping via the Underground Railroad. For the four million slaves in the United States and their abolitionist supporters, those that made it across the northern border—a precise figure is unknown, but it was likely between 20,000 and 40,000 fugitives—represented a repudiation of the slave system, and a new claim for liberty for those of African descent living in North America.

Yet after President Lincoln’s Emancipation Proclamation, at least 3,000 African Americans returned to the United States, eager to join the fight against slavery. Some became soldiers; others served as they could. Mary Ann Shadd Cary, born in Delaware, had founded an integrated school and edited the Provincial Freeman in Ontario in the 1850s. In 1863, she moved to Washington, D.C., where she served as a paid recruiting officer for the U.S. Army, embracing the U.S. Colored Troops’ Civil War fighting as the greatest form of black self-reliance. After the war, others, like Mifflin Gibbs, went back to the South, following family ties, and anxious to contribute to the struggle for racial equality. Shadd Cary and Gibbs left letters and memoirs; some left only traces of their movements in U.S. Census documents, their children marked as “Black” or “Mulatto,” with birthplaces in Canada.

As African North Americans explored new points of reference for their claims concerning political, cultural, and economic rights, they encountered the international context of late-nineteenth-century North American politics. They were able to link American Reconstruction and Canadian Confederation to German and Italian unification and to see the relevance of calls for civil rights for ethnic minorities in the new nation-states of Europe as well as in the increasingly controlling colonial regimes around the globe. African North Americans saw the power of alternatives and the opportunity, seized around the world, to radically alter the rights offered by and responsibilities placed upon governments, in the name of liberty.

Recently, the historian Michael Wayne has shown that the story of most black Canadians being fugitive slaves and most living in all-black communities and most returning to the United States is contradicted by evidence from the Canadian censuses. Using U.S. and Canadian Census records, Civil War pension files, newspapers, letters, and memoirs in both countries, as well as literary and artistic representations, I am constructing an extensive analysis of the African North American communities in Canada and the United States, from the beginnings of the Underground Railroad to the death of the emancipation generation, roughly stretching from the 1830s to the 1920s.

The first stage of this research has been the creation of a large database, tracking the name, age, “color,” family relations, employment, education, military service, and citizenship data (where available) from the U.S. and Canadian Censuses from 1850 to 1930, Civil War muster rolls, pension files, and other sources.

But my interest in this story came from something far more personal and affecting than long columns of numbers, a surprise found while researching my first book, on St. Louis and the Civil War Era. At a librarian’s suggestion, I examined the record for five members of the 72nd Regiment, U.S. Colored Infantry, who had enlisted in Missouri. Among the hundreds of men signing up for military service and a chance at equal rights during the Civil War, these men were specially marked, as “natives of Canada”—opening a wealth of questions. Did these men have a claim on U.S. citizenship? Was their involvement in the war legal? Did it open up Canada to attack from the Confederacy? Clearly these men felt an affinity for the Union cause after the Emancipation Proclamation—what would they gain, and what would they lose from their enlistments?

After these five men I found dozens more, children of fugitive slaves returning to fight in the land of their parents. I began searching for those who had themselves escaped or fled but returned to fight during the war, like Mary Ann Shadd’s brothers, or afterward, like Mifflin Gibbs. I considered the importance of the Fourth of July, 1870, debate over extending the (lily-white) Naturalization Act “to aliens of African nativity and to persons of African descent” as a result of their service, the first such change in U.S. history.

Clearly, the action of these men, and their efforts to reclaim attachment to the United States, extended the citizenship debates around the 14th and 15th Amendments to encompass those claiming a place within the United States long denied their families. Others, however, became frustrated with the failures of Reconstruction, seeking new lives in Jamaica, or Liberia, or by traveling the ever-widening African North American Diaspora. My ongoing research describes the thousands of African Americans in Canada determined to grasp their freedom in the era of U.S. Civil War and Reconstruction, in whatever country or way that made it possible.

This is a story of political awakening and economic advancement, of broken promises and cultural struggles. It takes a story familiar to all U.S. and Canadian residents and changes our focus, asking crucial questions about the era of emancipation and connecting the story of African Americans during Reconstruction to a global story of national consolidation and tightening racial regimes. Through the power of comparison and the recovery of forgotten stories, I am discovering and documenting what happens After the Underground Railroad.

Given my ongoing research and the difficulty in finding these stories, I welcome comments, questions, and especially those with family stories to tell to contact me, as I work to find as many of these stories as I can.

Arenson, A. (2011, January 12). After the Underground Railroad: Finding the African North Americans who Returned from Canada. BlackPast.org. https://www.blackpast.org/african-american-history/after-underground-railroad-finding-african-north-americans-who-returned-canada/

Mifflin Wistar Gibbs, Shadow and Light: An Autobiography with
Reminiscences of the Last and Present Century
(Washington, D.C.: n.p.,
1902), Sharon A. Roger Hepburn, Crossing the Border: A Free Black
Community in Canada (Urbana: University of Illinois Press, 2007);
Michael Wayne, “The Black Population of Canada West on the Eve of the
American Civil War: A Reassessment Based on the Manuscript Census of
1861.” Histoire Sociale/Social History Vol. 28, no. 56. (1995): 465–85;
Harvey Amani Whitfield, Blacks on the Border: The Black Refugees in
British North America, 1815-1860 (Burlington: University of Vermont
Press, 2006).