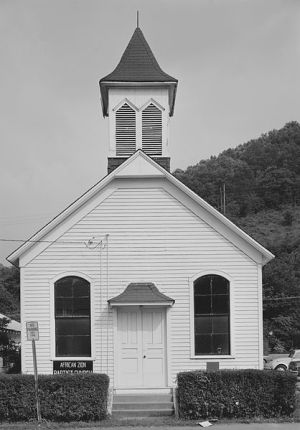 The African Zion Baptist Church is the first African American church in what is now West Virginia (West Virginia was a part of Virginia until 1863) and was the church of Booker T. Washington. The church is located in Malden, West Virginia, a town once home to over 1,500 slaves.

Formed in 1852 by a group of free black families, the church took over a decade to find a permanent home. The Reverend Lewis Rice held meetings in his home for several years and in 1865 the congregation built a temporary structure with the help of a donation from Union General and former Virginia General Assembly member Lewis Ruffner.

The dramatic expansion of the coal industry in West Virginia in the early 1870s brought an influx of black laborers to the Kanawha Valley. In turn, the church’s congregation grew and it moved to a larger building in 1872 that remains its home to this day. Also, as with many Baptist churches, it became the “mother church” of the area as other churches in the region trace their origins to African Zion.  These new churches became independent but joined with the original church to create the Mt. Olivet Baptist Association.

Booker T. Washington became a member of the African Zion Baptist Church at the age of nine in 1865. Along with his siblings and mother, Washington moved to Malden to join his step-father who worked in a salt-packing plant in the area. Washington was an active member until leaving to attend the Hampton Institute at the age of 16 in 1872.  After graduating from Hampton in 1875, Washington returned to Malden and became an active congregant at the church once again. He taught Sunday school, served as clerk of the Mt. Olivet Baptist Association, and married his first wife, Fannie Smith, in the church’s sanctuary in 1881. Washington soon left, however, to help found and lead the Tuskegee Institute in Alabama. Although he no longer lived in Malden, Washington remained a member of the church until his death in 1915.