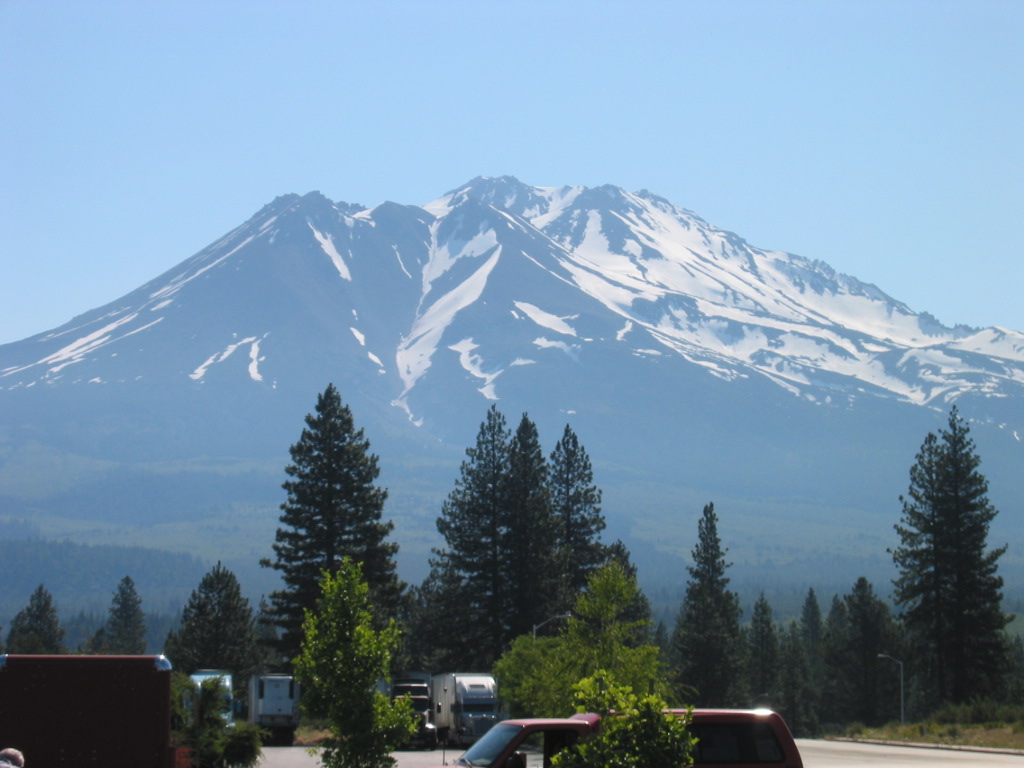 In the following article, James Langford, the first black teacher in Weed, briefly describes the history of the African American community there.  Langford, who graduated from California State University at San Francisco with an elementary teaching credential in the spring of 1974, began teaching at the Weed Union Elementary School on August 28, 1974.  He retired on June 7, 2007,  after thirty-three years.

It was June, 1923, when five young Black men set out in a Model T Ford from Broken Bow, Oklahoma, to a small town in northern California.  They were following the sounds of promise they had heard in the words of a young hobo, recently returned from a trip to the West Coast.  He told of a better life for Black people in this burgeoning lumber town.  “He said there was a mountain right there close to Weed you’d see snow the year round.”  These are the words of Danny Piggee, describing how he first heard of Weed, the town he was to live in for the next thirty-seven years.  “Weed was a miracle for Black people for work.”

When he and his cousin, Jim Hopkins, and their three companions  reached Weed at noon on June 19, 1923, after fourteen and a half days on the road, they ate dinner, went to the hiring office of Weed Lumber Company, then to the Weed Hospital for health checks, and started work the next morning.  A common laborer in the Weed mill was paid $3.60 for eight hours.  Piggee went to work taking down lumber on the yard with D. Grant, one of his Oklahoma companions, as his partner.  Because Grant had previous experience in this contract work, Piggee made over $5.00 the first day he worked.  As he thought to himself at the time, “Boy, I oughta been here for years back.”  In describing the town of Weed as it was in 1923, he said, “You could just almost pick your jobs when I came here.  And it was a lotta, lotta Black folks here.”

One thousand African-Americans lived in Weed by the mid-1920s, when the town’s population reached over six thousand.  In 1922, R. A. Long of Long-Bell Lumber Company had assumed complete ownership of the Weed Lumber Company.  The exodus of Black lumbermen from the South, triggered by R. A. Long, had begun with Nate Henderson’s arrival in Weed in 1918, with his nephew, William Wardlow.  Henderson, from Louisiana, was hired by Long-Bell to recruit workers in the South.  Walter Sexton, the first superintendent of the Weed plant under Long-Bell Lumber Company, was responsible for recruiting the largest number of Black workers from the South.  According to Rev. E. A. Mellon and Tommy Tyler (two long-time African-American residents), Sexton came to Weed from the Long-Bell operations in Louisiana in the early 1920’s.  He knew who the most trusted workers were, and tried to recruit the “cream of the crop.”  Mr. Sexton, on behalf of Long-Bell, paid the $89.00 train fare from Louisiana to Weed.  Most of the first Blacks to come to Weed were displaced workers from Long-Bell’s operations at De Ridder and Longville, in Louisiana.  After the men had made enough money in their new jobs, they repaid the company and sent back money to Louisiana so that relatives and friends could join them in Weed.  The general manager of the Weed operation from 1918 to 1948, Mr. J. M. “Jude” White, although he was not from Long-Bell’s Southern mills, is also given credit for opening up job opportunities in Weed for Black workers.

What kind of town awaited these first African-American migrants from the South?  Gertrude Price Wardlow, who arrived in 1920 from Louisiana via Oakland, California, describes the northwest corner of the town where the Blacks settled as nothing but snow-covered hills, with one dirt street.  The houses along this street, Railroad Avenue, were the first group of houses built in Weed.  They had been moved from the original site just north of Abner Weed’s first sawmill.  A few other houses were located northwest of Railroad Avenue, but there were no other defined streets.  Because of the housing shortage, Gertrude and her husband, Andrew Price, stayed at the boarding house when they first arrived.  This boarding house, located near the corner of Railroad Avenue and Lincoln Avenue, housed the single Black men who had come to work in Weed.  Because of the crowded conditions at the boarding house, the Weed Lumber Company “gave my husband a good price” for a house so that he and Gertie could board some of the men.

When Danny Piggee arrived in 1923, there were thirty-five or forty single men staying at the boarding house, paying $1.10 a day for room and board.  It was then known as the “Berryhill Hotel,” after Dan and Ella Berryhill, who had operated it since 1921.  When the boarding house was first built, Weed Lumber Company hired Nate Henderson to run it.  In 1920, when Mrs. Wardlow arrived, a couple named Jackson, from Oroville, California, was running it.  Since the Berryhills operated it until their deaths in the late 1940’s, when their niece took over until 1953, the boarding house is simply referred to as The Berryhill.  By 1923 there were company-built houses on Dixie, Texas, and Alabama Avenues.  Tent Street came into existence in 1924 when over-crowding prompted the company to bring in tents as temporary dwellings for Black families.  These tents were brought in from Tennant.  In the words of Mrs. Wardlow, “people started putting foundations around [the tents] and this ‘n’ that until they lived in them.”

Throughout the 1920s, as African-American families continued to arrive in Weed, they built houses on land leased from the company.  Long-Bell Lumber Company managed Weed as a residentially segregated, company-owned town.  And the first African-Americans to arrive from the South, accustomed to segregation since birth, occupied their designated corner of the town, known as “The Quarters.”  Willie Wardlow (Gertrude’s second husband), in a 1966 interview, recalls: “We used to see a For Rent sign, and when we asked, you know what they’d tell us?  They’d say, ‘We only rent to Americans.’ “ [The nearby town of McCloud had a similar demographic make-up.  According to an article in the 1997 Siskiyou Pioneer by Ray Ebbe, “McCloud, shortly after World War 1, had a population of over 500 colored people.”  The McCloud River Lumber Company, known as Mother McCloud owned the town.]

Some changes in this picture began after International Paper Company, based in New York City, bought out Long-Bell Lumber Company in 1956.  IP was not interested in running Weed as a company town.  They elected to sell the houses to the residents at a reasonable cost.  Soon after the city was incorporated in 1961, a group of concerned citizens from the African-American community met to change the name of their residential section from “The Quarters” to “Lincoln Heights,” and to rename those streets originally named after Southern states.

The national Civil Rights movement inevitably found its way to Weed. Amidst such racial upheaval, Weed’s NAACP chapter became quite active. Between 1955 and 1958, local Black residents staged sit-ins at Weed’s segregated eating establishments. The Log Cabin Hotel had a sign on the premises reading “We cater to whites only.”  The Weed Mercantile soda fountain and the Weed Theater fountain were among targeted sit-ins.  All establishments eventually complied with desegregation.

The Congress of Racial Equality (CORE) organized a chapter in Weed on June 5, 1966.  That summer CORE members staged boycotts at Weed’s Safeway store, Harold Chaney’s Weed Mercantile, Medo-Bel Creamery, and United California Bank.  The object of these demonstrations was an economic one—to have these local employers hire Blacks in a capacity other than clean-up.  A year after the 1966 summer campaigns, CORE leaders held a convention at the Mt. Shasta Baptist Church social hall and the Black Hawk Tavern, concluding that only token integration had been achieved.  Its tenure may have been short, its tangible accomplishments few, but the deep-seated desire that Siskiyou County residents settle down to a great deal of soul-searching was undoubtedly  accomplished by the confrontation tactics of CORE.  The protests were justified and progress definitely came from the risks that were taken.

Weed’s African American community has changed with the flow of forces affecting the town.  The closing of International Paper Company in 1982 had the most profound effect on the community at large.  Strong family ties and the healthy rural surroundings have surely been factors in the desire of Weed’s residents to persevere in the face of economic hardships.  My wife, Kathleen, and I raised our four children here.  They all went through the Weed school system, and have gone on to successful adult lives.  We have lived on our forested five acres on the outskirts of Weed for 29 years. Here, I am able to indulge my lifelong passion for animal husbandry.   Having taught and coached two generations of Weed’s children, I enjoy my respected status that seems to come with the title of “Mr. Langford.” It was indeed a fortunate decision I made in 1974 when I answered the call of the African American community of Weed, California, to become their first Black teacher, to live in the shadow of  Mt. Shasta…that mountain, right there close to Weed, where you see snow the year round.