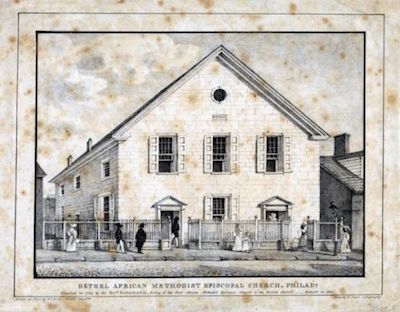 In the following account historian William L. Katz revisits an essay he first wrote in 1968 as the introduction to the reprinted volume of William Lloyd Garrison’s Thoughts on African Colonization which was first published in 1832. In the article below he describes the first mass protest meeting at Philadelphia in 1817 that eventually led to a nationwide black rejection of African colonization and compares it to the Black Lives Matter Movement that grew out of local protests in 2014 in Ferguson, Missouri over the killing of Michael Brown. Katz notes that in both Ferguson and Philadelphia nearly two centuries earlier, a “grassroots” protest arose which became so powerful that established African American leaders were compelled to join and support it.

In January 1817 nearly 3,000 African American men met at the Bethel A.M.E. Church (popularly known as Mother Bethel AME) in Philadelphia and denounced the American Colonization Society’s plan to resettle free blacks in West Africa.  This gathering was the first black mass protest meeting in the United States. The black leaders who summoned the men to the church endorsed the ACS scheme and fully expected the black men who gathered there to follow their leadership.  Instead they rejected the scheme and forced the black leaders to embrace their position.

The genesis of this remarkable meeting can found in the early efforts of Captain Paul Cuffee, a wealthy black New Bedford ship owner.  After an 1811 visit to the British colony of Sierra Leone which had been established to receive free blacks and later recaptives — blacks freed by the British Navy from slaving vessels taking them from Africa to the New World — Cuffee envisioned a similar colony for African Americans somewhere in West Africa. To promote his vision, Cuffee, at great financial loss, brought 38 black volunteer settlers from the United States to Sierra Leone in 1815.

When he returned to the United States with news of the resettlement he persuaded many of the most influential black leaders of the era to support him in transporting larger numbers of African Americans to a yet to be determined colony on the West African coast.  Rev. Peter Williams of New York, Rev. Daniel Coker in Baltimore, and James Forten, Bishop Richard Allen, and Rev. Absalom Jones all of Philadelphia, who were the most important African American leaders in the United States at that time, enthusiastically endorsed the plan.

Given the dire situation faced by free blacks in the North during that era, their endorsement was understandable. The vote was denied to all but a handful of black men.  No black women could vote at the time.  Black workers were limited in the occupations they could pursue and the wages they could receive.  In Philadelphia, New York, Boston, and other Northern cities they were subject to attack by white mobs and to the ever present threat of slavecatchers who kidnapped fugitive slaves and on occasion those who had never been enslaved. Thus to many leaders in the “free” North colonization seemed an attractive option.

At the same time Cuffee was recruiting black leaders to endorse his resettlement scheme, Rev. Robert Finley, the white minister of the Presbyterian Church in Basking Ridge, New Jersey, began what appeared to be a parallel plan for African American colonization in West Africa.  Enlisting the support of prominent politicians including President James Madison, he in December 1816 brought together numerous public officials, leading ministers, and important businessmen to the Davis Hotel in Washington, D.C. to create “The American Society for Colonizing the Free People of Color of the United States.”  The organization soon became popularly known as the American Colonization Society (ACS).  With Bushrod Washington, the nephew of President George Washington as its first president, the list of vice-presidents included Henry Clay, Daniel Webster, John Randolph, Francis Scott Key, and General Andrew Jackson.

Both the Cuffee group and the ACS believed free American blacks should settle in West Africa. There however the similarity ended. Cuffee and his supporters hoped that free blacks and eventually freed slaves would go to a yet to be determined African colony and thus begin the process of emptying the U.S. of its black population, both slave and free. The ACS was clear from its founding that its efforts would involve only free blacks. There would be no interference with the institution of slavery.  Considering that most of the prominent supporters were themselves slaveholders, this was hardly surprising. As the ACS viewed the situation, free blacks were a dangerous element who potentially incited enslaved people to rebellion. Thus removing them from the United States would strengthen the institution of slavery.

Some white leaders at the time recognized this as well. The editor of the New York Courier, writing in mock Negro dialect, suggested that if colonization was such a fine idea, why didn’t Henry Clay return to England?  He then suggested that African Americans remain in the United States while whites sailed to Africa and proposed that blacks form an organization to facilitate the white exodus.

In this highly charged atmosphere Rev. Finley met with Paul Cuffee and other black leaders to get their endorsement of the ACS colonization plan.  During the hour-long meeting Finley received the blessing of Bishop Allen, James Forten, and Rev. Absalom Jones whose church was the venue for the gathering. Rev. Finley, who later wrote about the meeting, recalled the comment of Bishop Allen. According to Finley, the Bishop indicated that “were he young he would go himself.”  The Bishop then declared, “the present (ACS) plan of colonization as holding out great advantages for blacks who are now young.”

A short time later in January 1817, Bishop Allen and other black leaders who had endorsed the ACS called the meeting in Bethel A.M.E. Church.  Some 3,000 black men, virtually the entire black male population of Philadelphia, gathered to hear about colonization. The black leaders expected the African American men of the city to endorse the ACS and Cuffee colonization schemes.  What they received instead was a denunciation of the plan.  Apparently the black men feared that all free blacks would be compelled to go to Africa including especially those in the slaveholding states. They saw (correctly as it turns out) that the ACS scheme allowed slaveholders to get rid of free blacks.

James Forten later described the meeting in some detail to Paul Cuffee in a letter dated January 25, 1817. Forten wrote that “not one sole [sic] was in favor of going to Africa.”  Forten then added that although he personally believed that “they will never become a people until they com [sic] out from amongst the white people,” he nonetheless concluded that since the overwhelming majority of men were opposed to colonization, he and the other leaders would remain silent.  Eight months later on August 10, 1817 at a second mass colonization meeting, Forten and the black leaders who had previously endorsed the ACS and Cuffee plans, now came out in opposition to colonization. They remained publicly opposed for the rest of their lives.

The January 1817 gathering of African American men became more than the first African American protest meeting on U.S. soil. It is an early example of what a people can accomplish when they are so united, determined, and fearless that they are willing to challenge their adversaries and their own traditional leadership. In one loud voice the black men of 1817 foiled a slaveholder scheme supported by a semi-government organization to exile them from their homeland, the land of their birth. Their unanimous vote also sent a clear message to their own leaders that they stood resolutely with their loved ones still in chains, not the slaveholders.

These black Philadelphians of 1817 also publicly declared their claim on the United States. As far as they were concerned this was their land as well. They recalled that many of their kinsmen where among the 6,800 men who had fought and died in its Revolution on the Patriot side and an even larger number had been killed fighting with the British. Those black men on each side fought not for independence or the continuation of empire but for the principle of freedom in the abstract and as importantly for their own physical liberation.

Eventually anti-colonization sentiment spread across black America. Although there were recurring colonization or Back-to-Africa movements in the 1840s, the 1880s (where by this point the ACS was controlled by African Americans), most notably in the early 1920s with Marcus Garvey’s Universal Negro Improvement Association, and the 1960s, African Americans have generally continued to adhere to the sentiment of the black men who met in January 1817 in Philadelphia.

The historic January 1817 meeting in Philadelphia and the Ferguson protests 197 years later are both teachable moments. African Americans in Ferguson, Missouri and eventually all across the nation created the Black Lives Matter Movement to raise awareness about police brutality. Both Philadelphia and Ferguson are reminders of what a united people can accomplish even if it means defying their own leadership.