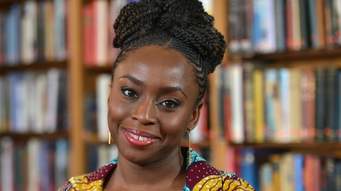 Chimamanda Ngozi Adichie is a Nigerian-born writer who is best known for her published works that have garnered internal acclaim. Adichie, the fifth of six children, was born on September 15, 1977, in Enugu, Nigeria, to James Nwoye Adichie and Grace Ifeoma. Her father was the first professor of statistics at the University of Nigeria in Nsukka and would later become the Deputy Vice Chancellor of the institution. Her mother worked as a registrar at the same university and was the first woman to hold that position. At the University’s school, Adichie obtained her secondary education while earning multiple academic related prizes. She then studied medicine and pharmacy at the University of Nigeria for a year and a half. While at the university, Adichie edited the Catholic medical student magazine, The Compass.

Adichie left Nigeria for the United States when she was 19 to study communications at Drexel University in Philadelphia, Pennsylvania. After two years at Drexel, she transferred to Eastern Connecticut State University to finish her studies. During her time at Eastern, she contributed articles to the Campus Lantern, the university’s journal. In 2001, Adichie graduated summa cum laude from the institution with a degree in communication and political science. She then obtained a Master’s in Creative Writing and Master of Arts in African studies from Johns Hopkins University in 2003 and Yale University in 2008 respectively. During the 2005-2006 academic year she was a Hodder fellow at Princeton University in New Jersey.

Adichie initially began working on Purple Hibiscus, her first novel, during her senior year at Eastern Connecticut and it was published in 2003. This work earned her the Commonwealth Writers’ Prize and the Hurston/ Wright Legacy Award. The book centered on the themes of the promise of freedom, the emotional turmoil of adolescents, and the compelling bonds of family. Her next novel, Half of a Yellow Sun, was published in 2006 and focused on the Nigerian-Biafran War. It won the Orange Broadband Prize for Fiction and was a National Book Critics Circle Award finalist.

Adichie published a collection of short stories titled The Thing around Your Neck in 2009. Between 2011 and 2012 Adichie was awarded a fellowship by the Radcliffe Institute for the Advanced Study at Harvard University and this allowed her to finish Americanah, her third novel. In 2014, she published an essay with the name “We Should All Be Feminists” that was based on her 2012 TEDx talk of the same name. Three years later Adichie published an essay titled “Dear Ijeawele, or a Feminist Manifesto in Fifteen Suggestions”.

Adichie has been awarded multiple honorary degrees including Doctor of Humane Letters, honoris causa degrees from Johns Hopkins University and Haverford College. Chimamanda Ngozi Adichie is married and has a daughter.