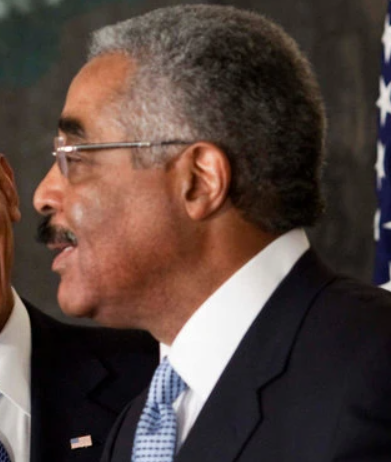 Addison Barry Rand became one of the first African American chief executives of a Fortune 500 company when he took control of Avis rental car company in 1999.

Addison Barry Rand was born in Washington D.C. on Nov. 5, 1944. His mother, Helen Matthews Rand, was an elementary school principal, and his father, Addison Penrod Rand, was a postal supervisor. Rand graduated in 1962 from Archbishop Carroll High School in Washington, D.C. While attending this majority white high school, he excelled in academics, was captain of the basketball and football teams, and was voted senior class president. Rand received a bachelor’s degree in marketing from American University in 1968 and four years later he received a master’s degree in business administration from Stanford University. The following year (1973), he received a second master’s degree in management sciences from the same university.

Rand joined Xerox in 1968 and spent the next 30 years there where he developed a reputation as a strong salesman and motivator who helped build a highly diverse workplace. He was instrumental in ensuring minorities and women had every opportunity for advancement at the company. Under his leadership, Xerox became the most diverse company among the top 50 of the Fortune 500 companies.

Rand also helped lead Xerox as it struggled to hold on to its market share and to compete with Japan. In 1992, he was named executive vice president of worldwide operations, a position that put him in control of 70,000 employees and $18 billion in revenue. This promotion also placed him in a prime position to succeed CEO Paul A. Allaire as chief executive. However, the post ultimately went to G. Richard Thoman, formerly of IBM.

Leaving Xerox in November 1999, he was named chairman and chief executive of Avis, then the second-largest rental car company in the United States. Rand led Avis as it expanded its operations to include not only car rentals, but also automobile fleet management for other companies. His time at the helm proved brief, however; he stepped down in March 2001 as Cendant Corp. completed its acquisition of Avis.

Barry Rand became the chairman of the Board of Trustees of Howard University in 2006. He held that position until 2014. In 2009, he became chief executive officer (CEO) of AARP, formerly the American Association of Retired Persons. He held that position until 2014. AARP is the nation’s largest nonprofit, nonpartisan organization with over 38 million members, dedicated to helping people age 50 and over to improve the quality of their lives.

Addison Barry Rand died on Nov. 7, 2018 in an assisted living facility in Norwalk, Connecticut at the age of 74. His wife, Donna Rand, said the cause was Alzheimer’s disease. Rand was survived by his wife and two adult children.