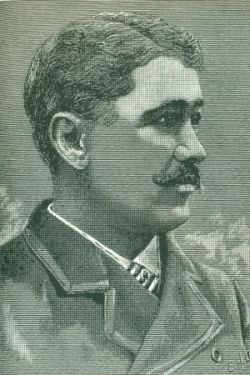 Educator, newspaper publisher and politician John Quincy Adams is best known as the editor of the Western Appeal/The Appeal of St. Paul, Minnesota. He held the position from 1886 to 1922.

John Quincy Adams was born free in Louisville, Kentucky, on May 4, 1848, to the Reverend Henry and Margaret Priscilla Adams (née Corbin). He was one of four children. Adams attended private academies in Fond du Lac, Wisconsin, and Yellow Springs, Ohio, and graduated from Oberlin College in Ohio. He then moved to Arkansas where he taught in schools in Little Rock before taking a position assisting his uncle, Joseph C. Corbin, who was Arkansas’ Superintendent of Public Instruction. Between 1870 and 1876 he also was involved in Republican Party politics and served as Engrossing Clerk in the state senate and as Deputy Commissioner of Public Works.

Between 1876 and 1886 Adams lived in Louisville, Kentucky, where he taught school and was engaged in Republican Party politics at the state and national levels, serving as Ganger and Storekeeper in the United States Revenue Service. He lost that appointment with the election of Grover Cleveland in 1884. During that period, he and his brother Cyrus Field Adams published the weekly Louisville Bulletin between1879 and 1886. In 1880 Adams was responsible for convening the first Colored National Press Convention and was elected its first president, a position that he held for two years.

In 1886 he sold the Bulletin and moved to St. Paul, Minnesota, where he became associate editor, editor and later owner of The Western Appeal between 1886 and 1922. Adams transformed it into a national newspaper with offices in Minneapolis, Chicago, St. Louis, Dallas, and Washington, D.C., and he changed its name to The Appeal in 1889 to reduce its identity as a Midwestern press.

Adams’ newspaper in St. Paul became the center of political activism in the upper Midwest, challenging the “color line” that continued in Minnesota after the Civil War. He partnered with Fredrick L. McGhee, a young African American lawyer from Chicago who moved to St. Paul in 1889. The two were instrumental in initiating legal challenges to racial discrimination in Minnesota and in passing legislation guaranteeing civil rights. He and McGhee were founders of Minnesota’s Protective and Industrial League, which affiliated with the Afro-American League in 1890 and later the Afro-American Council. His paper remained a publication of the Republican Party, even when McGhee had abandoned it.

Adams was a consistent supporter of Booker T. Washington and the Tuskegee Model at the conventions of the Afro-American Council held in St. Paul in 1902 and in Louisville in 1903. That support damaged Adams’ reputation within that group allying itself to the Niagara Movement and later the National Association for the Advancement of Colored People (NAACP).

Adams married Ella Bell Smith of St. Paul on May 4, 1892. They had four children (Adina, Margaret, Edythella, and John, Jr.). John Quincy Adams died in St. Paul, Minnesota, on September 4, 1922, when struck by an automobile when he was in the process of boarding a streetcar. Adams was one of the last post-reconstruction editors who survived into the twentieth century.