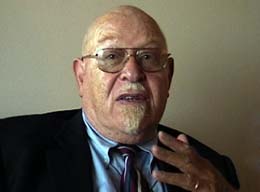 Clergyman and civil rights activist John Hurst Adams was born November 27, 1927 in Columbia, South Carolina to Reverend E.A. Adams and homemaker Charity Nash Adams.  John Adams graduated from Booker T. Washington High School in Columbia, South Carolina and in 1947 earned an A.B. degree in history from Johnson C. Smith University in Charlotte, North Carolina.  Later, he earned his Bachelor of Sacred Theology (S.T.B.) degree and Master of Sacred Theology (S.T.M.) degree from Boston (Massachusetts) University School of Theology in 1952 and 1956, respectively. Adams also studied at Harvard University and Union Theological Seminary, as well. He attended Boston University for his theology degree at the same time as Rev. Martin Luther King.  After completing his education at Boston University, Adams served briefly on the teaching faculty of Payne Theological Seminary at Wilberforce University in Ohio. Then in 1956 he was named president of Paul Quinn College in Waco, Texas at age 29.  At the time he was the youngest person named to the presidency of Paul Quinn College and the youngest college or university president in the nation.  Adams remained at the institution until 1962.

Rev. Adams arrived in Seattle, Washington in 1962 to become the pastor of First African Methodist Episcopal Church, the oldest black church in the state.  He held the pastorate from 1962 until 1968.   While at the church Adams became one of the leaders of the African American civil rights movement in Seattle.  He chaired the Central Area Civil Rights Committee from its founding in 1963 until 1968 and was a co-founder of the country’s first war on poverty agency, the Central Area Motivation Program (CAMP). Along with other local black leadership at that time, Adams participated in what he called “an inner circle” of local civil rights leaders whose coordinated leadership transformed Seattle’s community movement and politics.

While in Seattle, Adams won a number of awards for his staunch advocacy for racial justice.  The Seattle Chapter of B’nai B’rith named him Man of the Year in 1964 and the following year, the Seattle Urban League bestowed the same honor upon him. Reverend Adams was a member of Alpha Phi Alpha and Sigma Pi Phi fraternities.

In 1968, Reverend Adams was moved by his Bishop to serve as pastor of Grant AME Church in the Watts neighborhood of Los Angeles, California. After four years as a pastor in Los Angeles, he was made Bishop of the AME Church in Texas in 1972.  He served as Bishop in a number of districts including his home district of South Carolina before his retirement in 2004 at the age of 77. While in South Carolina, Adams led the successful effort to remove the Confederate flag from the South Carolina State House.

Dr. Adams was also Chairman of the Board of Trustees of the Interdenominational Theological Center (ITC) in Atlanta.  He has served on the Board of trustees of Allen University in Pennsylvania, Edward Waters College in Florida, and Morris Brown College.  He is the founder of the Congress of National Black Churches, Inc., in 1978.

Quintard Taylor, The Forging of a Black Community: Seattle’s Central
District from 1870 to the Civil Rights Era
(Seattle: University of
Washington Press, 1994);  http://depts.washington.edu/civilr/adams.htm.