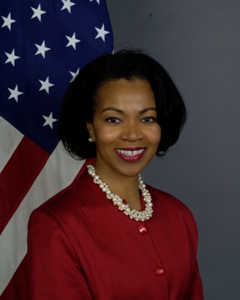 Gina Abercrombie-Winstanley, the first woman diplomat to lead a U.S. consulate in the gender conservative Kingdom of Saudi Arabia, also serves as the U.S. Ambassador to Malta (appointed in 2011). Gina Kay Abercrombie was born in Cleveland Heights, Ohio, where her mother was a secretary and her father an attorney.  She developed international interests early. Around her neighborhood, Hebrew was commonly spoken by the local Jewish population, so she decided to study the language. This interest also led to participation in an international exchange program in Israel (1978-1979), while in college, followed by joining the U.S. Peace Corps as a volunteer in Oman.

Abercrombie-Winstanley joined the U.S. Foreign Service in 1985 and soon left for her first assignment, a posting in Baghdad, Iraq, where she focused on the Iran-Iraq war. She then spent time at U.S. Embassies in Jakarta, Indonesia and Cairo, Egypt. She then returned state-side to become Special Assistant for Middle Eastern and African Affairs to Deputy Assistant Secretary of State, Lawrence Eagleburger (1991-1993). After a year of intensive Arabic language training in Tunisia, Abercrombie-Winstanley then became a Political Officer at the U.S. Embassy in Tel Aviv, Israel (1994-97), focusing on Palestinian-Israeli relations.

From Tel Aviv, Abercrombie-Winstanley returned to the U.S. to serve in the President Bill Clinton Administration as part of the National Security Council.  As a member of the Council she was Director for Near East-South Asian Affairs and then Director of Legislative Affairs. She then became Senior Advisor for Middle Eastern Affairs at the U.S. Mission to the United Nations, followed by a position as Policy Advisor for the Near East-South Asia Center for Strategic Studies at the U.S. Department of Defense. Abercrombie-Winstanley also spent time on the Senate Foreign Relations Committee working for Ranking Member Senator Joseph Biden (D-Delaware).

These experiences led to her becoming the first woman Counsel General in the U.S. Consulate in Saudi Arabia, and while there she received a citation for “acts of courage” during a deadly 2004 al-Qaeda terrorist attack on the Consulate. After another stint back in Washington, D.C., Abercrombie-Winstanley was appointed as U.S. Ambassador to Malta in 2011, making her the first non-politically appointed Ambassador of that country since 1989. Her appointment has also been hailed by many as a sign of the growing U.S. interest in that small European country’s strategic importance as a gateway between Europe, the Middle East, and North Africa.

Abercrombie-Winstanley is committed to promoting diversity and inclusion in U.S. leadership and diplomatic affairs, and has used her platform on the Boards of the International Career Advancement Association and the Forum for Education Abroad to do so. She is a graduate of Cleveland Heights High School, George Washington University, and the Johns Hopkins University.

Ambassador Abercrombie-Winstanley has been married to Gerard A. Winstanley since 1982, and they have a daughter and a son.

AllGov.com:
http://www.allgov.com/news/appointments-and-resignations/ambassador-to-malta-who-is-gina-abercrombie-winstanley?news=843565
;
“Arab Women Should Not Give in to the Restrictions of their Cultural
Environment,” Interview with Arab News, March 1, 2004, by Khaled M.
Batarfi, Al-Madinah.