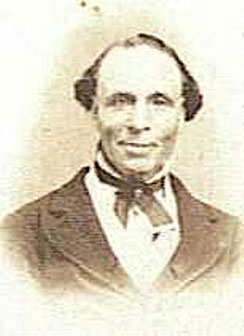 Elijah Abel, early convert to the Church of Jesus Christ of Latter-day Saints (LDS), was born on July 25, 1810 in Washington County, Maryland to Andrew and Delilah Abel, likely in bondage. There is some evidence that he used the Underground Railroad to escape slavery. He eventually found his way to the first settlement of the Latter-day Saints: Kirtland, Ohio. Church records indicate that he joined the Church.  On March 3, 1836, he was ordained to the Melchizedek priesthood, and was subsequently ordained (April 4, 1841) into the Quorum of the Seventy, the first person of African ancestry to join that group. This was a missionary designation and signified some power within the Church.

Abel, a skilled carpenter, helped build the Kirtland LDS Temple, and when the Mormons moved to Nauvoo, Illinois, he worked on the Nauvoo Temple as well, and eventually also worked on the Salt Lake Temple.  He was asked by Church founder Joseph Smith, Jr. to be an undertaker in Nauvoo, a common job for carpenters. Abel also represented the LDS Church as a certified missionary in New York and Canada.  According to one of his white converts, Eunice Kinney, he had been ordained into the priesthood by Joseph Smith, Jr. Church records show he was ordained in the Quorum of Seventy in the Melchizedek priesthood possibly around 1839.   In July 1843, however Abel was asked by Church leaders to preach only “to his own kind.”

Abel moved to Cincinnati, Ohio around 1842, where he married Mary Ann Adams, nearly twenty years his junior. The couple prospered in Cincinnati and continued to be active in the LDS Church. They had five children, Moroni, Enoch, Anna, Delilah, and Elijah. Abel and his family made the arduous journey to Salt Lake City, Utah Territory in 1852. There, Abel ran the Farnham Hotel and continued his work as a carpenter.

By the time Abel joined other Saints in Utah Territory, Joseph Smith, Jr. had been assassinated (1844) and Brigham Young, who became the next President of the Church, instituted a policy in 1852 restricting blacks from participating in the LDS priesthood and other significant rituals. In 1853 Young specifically denied Abel’s request to receive the temple endowment after Abel’s petition. Though Abel’s ordination was never denied or undone, his privileges were thenceforth limited.

After Brigham Young died in 1877, Abel in 1879 again asked permission to enter the temple and to be sealed to his wife, who had died the year before. This request was denied.  He remained, however, a devout member of the LDS Church until his death. In 1883 at the age of 73 he embarked on his third mission for the Church to the eastern states, returning ill to Salt Lake City and dying on December 25th, year at the age of 74.

Abel’s obituary in the Deseret News makes specific note of his priesthood: “Died, Elijah Abel…of old age and debility…. He joined the Church and was ordained an Elder as appears by certificate dated March 3rd, 1836. He was subsequently ordained a Seventy, as appears by certificate dated April 4, 1841. He labored successfully in Canada and also performed a mission in the United States, from which he returned about two weeks ago. He died in full faith of the Gospel.”

Elijah Abel was buried in the Salt Lake City Cemetery.  A monument to him was dedicated in 2002.