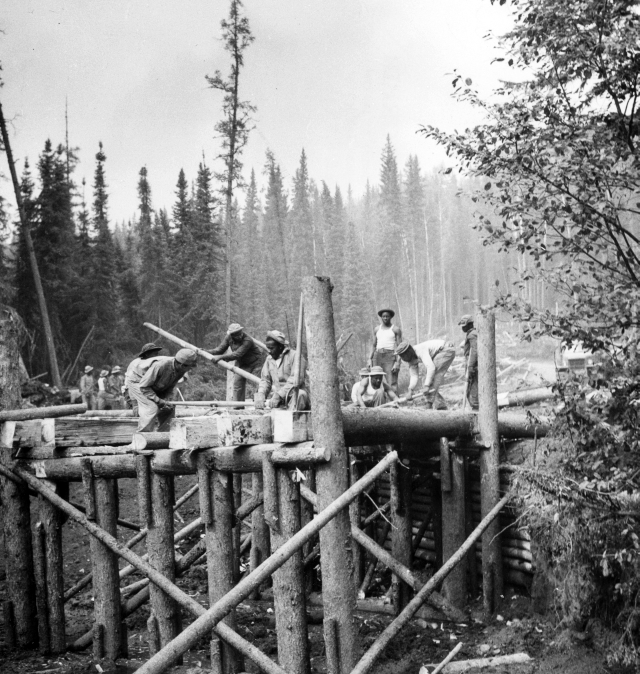 In the 1930s military planners had identified the need for a highway linking Alaska to the continental United States, but it took World War II to jumpstart construction on a scheme “likened to building the Panama Canal.”  The 95th Engineers joined four white and two other black regiments already working in the rugged terrain of Alaska, Yukon Territory, and British Columbia.  Although the enlisted soldiers were almost entirely African American, the officers were mostly white and military mail censors encountered several tales of discrimination.  There was also evidence of racism in the way projects were assigned to units, such as when the 95th was ordered to give its heavy equipment to the less experienced but white 341st Engineers and function in a support role for that organization.

Problems were certainly exacerbated under the 95th Engineers’ first commander, Colonel Dave Neuman.  After his replacement by Colonel Heath Twichell in July, conditions became considerably better.  Responsible for improving the road built by the 341st Engineers from Dawson Creek to Fort Nelson in British Columbia, the regiment established a reputation for excellence, particularly in the field of bridge building.  This continued under Colonel Owain Hughes, who replaced Twichell in October.  Nevertheless, the black soldiers were discouraged from mixing with local Canadians and their accomplishments were consistently ignored in the press.

Finishing the project more than a year ahead of schedule, the highway was available for military traffic by the spring of 1943.  The 95th Engineers returned to the United States in February and began training for Europe.  Along with the 93rd and 97th Engineers, the 95th was now deemed fit for overseas deployment.  It would be decades, however, before they received recognition for their hard work in Canada.