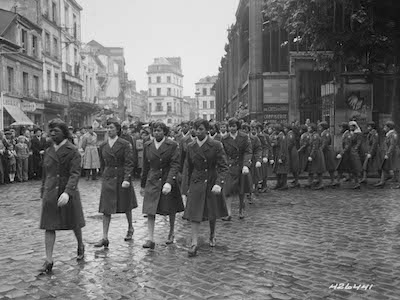 The 6888th Central Postal Directory Battalion was an all-black battalion of the Woman’s Army Corps (WAC). The 6888th had 855 enlisted African American women and officers. The battalion was commanded by Major Charity Edna Adams Early, who became the highest-ranking African American woman in the military at the end of the war. It was the only all-black, all-female battalion overseas during World War II. The group was nicknamed “Six Triple Eight” and their motto was “No mail, no morale.” The battalion was organizing into five companies—Headquarters Company, Company A, Company B, Company C, and Company D. Most of the 6888th worked as postal clerks, cooks, mechanics, and in other support positions.

The Women’s Army Corps (WAC) of the U.S. Army was created by a law that was signed by President Franklin D. Roosevelt on July 1, 1943. First Lady Eleanor Roosevelt and civil rights leader Dr. Mary McLeod Bethune called for African American women to serve as enlisted personnel and officers in the WAC. With several units of white woman sent to serve the European theater of the war, African American organizations pressed the War Department to extend the opportunity to serve overseas to African American WAC.

In November 1944, despite the slow recruitment of volunteers, a battalion of 817 (later 824) enlisted personnel and 31 officers, all African American women drawn from the WACs, the Army Service Forces, and the Army Air Forces, was created which was eventually designated as the 6888th Central Postal Directory Battalion. The 6888th battalion was trained for their overseas mission at Fort Oglethorpe, Georgia.

The 6888th left the United States on February 3, 1945, sailing on the IIe de France, and arrived at Glasgow, Scotland, on February 14, 1945. The women then took a train to Birmingham, England, where they worked in three different shifts, seven days a week, processing and delivering mail. Each shift handled an estimated 65,000 pieces of mail. The 6888th was a racially segregated unit, with blacks sleeping and eating in different locations away from white soldiers. Some women of the 6888th felt the European locals treated them better than people did in the United States.

The 6888th arrived at Le Harve, France, in June 1945 and then to Rouen, France, to deal with another backlog of letters. By October 1945, the mail in Rouen had been cleared, and the 6888th was sent to Paris, France. While at Paris, the 6888th was housed in a luxurious hotel and received first class treatment. In February 1946, since the war was now over, the woman of the 6888th returned to the United States where they were disbanded at Fort Dix, New Jersey.

Members of the 6888th Central Postal Directory Battalion were awarded the European-African-Middle Eastern Campaign Medal, the Good Conduct Medal, and the World War II Victory Medal for their service. Mary Ragland and Alyce Dixon, who were members of the 6888th, were honored by President Barack Obama and First Lady Michelle Obama in 2009.