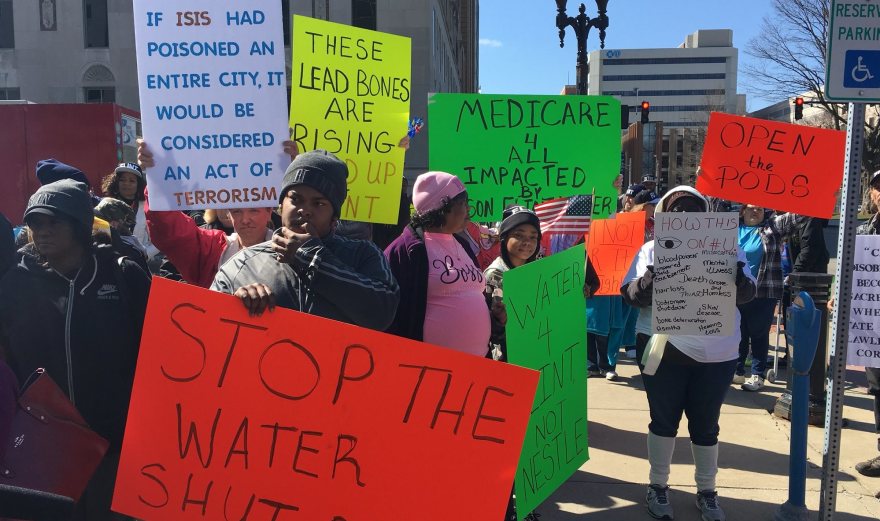 The Flint Water Crisis was a public health catastrophe in Flint, Michigan, a city of nearly 100,000 residents, 57% of whom were black. After the city switched its water supply to the Flint River in April 2014, residents were exposed to pathogenic microbes and toxic levels of lead through drinking water. An outbreak of Legionnaire’s disease, which killed 12 people and sickened dozens more, was also linked with the crisis.

For decades, Flint had purchased Lake Huron water treated by Detroit Water and Sewerage Department (DWSD). In March 2013, as a cost-saving measure, Flint declared to switch its water supply to Karegnondi Water Authority, which was building a new pipeline to draw water from Lake Huron and would begin to operate in 2016. In April 2014, DWSD terminated its service contract with Flint, and the two parties did not settle an interim contract. Flint officials decided to use the Flint River as a temporary water source until 2016.

However, the Flint Water Treatment Plant failed to implement adequate corrosion control measures to treat the highly corrosive river water. Shortly after the switchover, tap water appeared with rusted color, foul smell, and bad taste, indicators of iron pipe corrosion. In August 2014, coliform bacteria were detected in the water. Extra chlorine was added to the water to reduce microbes, which precipitated the formation of carcinogenic trihalomethanes. In December 2014, it was discovered that Flint water violated the Safe Drinking Water Act due to excessive levels of trihalomethanes. Moreover, improperly treated river water corroded lead pipes, leaching lead into tap water. In early 2015, testing results started to show that lead levels in Flint water were rising.

Despite residents’ complaints, state and local officials were slow to respond to the emerging crisis. A turning point came in September 2015 when a team of researchers determined that lead value in Flint water exceeded the federal action level (15 parts per billion), and Dr. Mona Hanna-Attisha, a Flint pediatrician reported that the percentage of children with elevated blood lead levels had increased from 2.4% to 4.9%. Pressed by scientific evidence, Genesee County announced a public health emergency in Flint. In January 2016, President Barack Obama declared a federal emergency in Flint. Bottled water and faucet filters were provided to Flint households.

Although Flint switched back to the Detroit water system in October 2015, it would take years to restore water safety. In March 2017, a lawsuit filed by Flint residents reached a court-ordered settlement that required the city to replace all lead pipes within three years. In April 2018, citing that water lead levels had been below 15 ppb for two years, Michigan ceased distributing free bottled water, although many residents still distrusted water quality. By June 2021, water lead levels in Flint have dropped to 3 ppb, and the city has replaced over 10,000 lead and galvanized pipes. Flint expects to complete this lead pipes replacement program within 2021.

The Flint Water Crisis raised nationwide concerns about lead exposure in drinking water. A report by Michigan Civil Rights Commission asserts that systemic racism played a role in the crisis. In January 2021, nine former Michigan and Flint officials were charged in connection to the crisis. In March 2021, President Biden proposed the American Jobs Plan, which includes a program to replace all lead pipes and service lines in the country’s water systems.