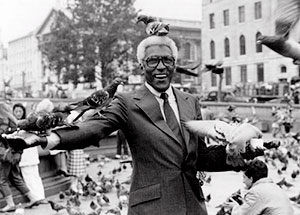 Bayard Rustin, a co-founder of the Congress of Racial Equality in 1942 had become by the 1960s an experienced civil rights and peace activist.  During much of that decade he was a close associate of Dr. Martin Luther King.  In this address originally printed in Commentary, Rustin argues that the movement upon achieving its immediate goals including public accommodations desegregation and voting rights, would then turn to the much more difficult question of economic justice.

What is the value of winning access to public accommodations for those who lack money to use them? The minute the movement faced this question, it was compelled to expand its vision beyond race relations to economic relations, including the role of education in modern society.  And what also became clear is that all these interrelated problems, by their very nature, are not soluble by private, voluntary efforts but require government action or politics. Already Southern demonstrators had recognized that the most effective way to strike at the police brutality they suffered from was by getting rid of the local sheriff and that meant political action, which in turn meant, and still means, political action within the Democratic party where the only meaningful primary contests in the South are fought.

And so, in Mississippi, thanks largely to the leadership of Bob Moses, a turn toward political action has been taken.  More than voter registration is involved here. A conscious bid for political power is being made, and in the course of that effort a tactical s is being effected: direct action techniques are being subordinated to a strategy calling for the building of community institutions or power bases. Clearly, the implications of this shift reach far beyond Mississippi. What began as a protest movement is being challenged to translate itself into a political movement. Is this the right course? And if it is, can the transformation be accomplished?

The very decade which has witnessed the decline of legal Jim Crow has also seen the rise of de facto segregation in our most fundamental socio economic institutions. More Negroes are unemployed today than in 1954, and the unemployment gap between the races is wider. The median income of Negroes has dropped from 57 per cent to 54 per cent of that of whites. A higher percentage of Negro workers is now concentrated in jobs vulnerable to automation than was the case ten years ago. More Negroes attend de facto segregated schools today than when the Supreme Court handed down its famous decision; while school integration proceeds at a snail’s pace in the South, the number of Northern schools with an excessive proportion of minority youth proliferates. And behind this is the continuing growth of racial slums, spreading over our central cities and trapping Negro youth in a milieu which, whatever its legal definition, sows an unimaginable demoralization. Again, legal niceties aside, a resident of a racial ghetto lives in segregated housing, and more Negroes fall into this category than ever before.

These are the facts of life which generate frustration in the Negro community and challenge the civil rights movement. At issue, after all, is not civil rights, strictly speaking, but social and economic conditions. Last summer’s riots were not race riots; they were outbursts of class aggression in a society where class and color definitions are converging disastrously. How can the (perhaps misnamed) civil rights movement deal with this problem? . . .

This matter of economic role brings us to the greater problem the fact that we are moving into an era in which the natural functioning of the market does not by itself ensure every man with will and ambition a place in the productive process. The immigrant who came to this country during the late 19th and early 20th centuries entered a society which was expanding territorially and/or economically. It was then possible to start at the bottom, as an unskilled or semi skilled worker, and move up the ladder, acquiring new skills along the way. Especially was this true when industrial unionism was burgeoning, giving new dignity and higher wages to organized workers. Today the situation has changed. We are not expanding territorially, the western frontier is settled, labor organizing has leveled off, and our rate of economic growth has been stagnant for a decade. And we are in the midst of a technological revolution which is altering the fundamental, structure of the labor force, destroying unskilled and semi skilled jobs jobs in which Negroes are disproportionately concentrated:

Whatever the pace of this technological revolution may be the direction is clear: the lower rungs of the economic ladder are being lopped off. This means that an individual will no longer able to start at the bottom and work his way up; he will have start in the middle or on top, and hold on tight. It will not even be enough to have certain specific skills, for many skilled jobs are also vulnerable to automation. A broad educational background, permitting vocational adaptability and flexibility, seems more imperative than ever. We live in a society where, as Secretary of Labor Willard Wirtz puts it, machines have the equivalent of a high school diploma. Yet the average educational attainment of American Negroes is 8.2 years…

Let me sum up what I have thus far been trying to say: the civil rights movement is evolving from a protest movement into a full fledged social movement an evolution calling its very name into question. It is now concerned not merely with removing the barriers to full opportunity but with achieving the fact of equality.  From sit ins and freedom rides we have gone into rent strikes, boycotts, community organization, and political action. As a consequence of this natural evolution, the Negro today finds himself stymied by obstacles of far greater magnitude than the legal barriers he was attacking before: automation, urban decay, de facto school segregation. These are problems which, while conditioned by Jim Crow, do not vanish upon its demise. They are more deeply rooted in our socio economic order; they are the result of the total society’s failure to meet not only the Negro’s needs, but human needs generally….

The revolutionary character of the Negro’s struggle is manifest in the fact that this struggle has done more to democratize life for whites than for Negroes. Clearly, it was the sit-in movement of young Southern Negroes which, as it galvanized white students, banished the ugliest features of McCarthyism from the American campus and resurrected political debate. It was not until Negroes assaulted de facto school segregation in centers that the issue of quality education for all children stirred into motion. Finally, it seems reasonably clear that the civil rights movement, directly and through the resurgence of social conscience it kindled, did more to initiate the war on poverty than any other single force.

Neither that movement nor the country’s twenty million black people can win political power alone. We need allies. The future of the Negro struggle depends on whether the contradictions of this society can be resolved by a coalition of progressive forces which becomes the effective political majority in the United States. I speak of the coalition which staged the March on Washington, passed the Civil Rights Act, and laid the basis for the Johnson landslide Negroes, trade unionists, liberals, and religious groups….

The role of the civil rights movement in the reorganization of American political life is programmatic as well as strategic. We are challenged now to broaden our social vision, to develop functional programs with concrete objectives. We need to propose alternatives to technological unemployment, urban decay, and the rest. We need to be calling for public works and training, for national economic planning, for federal aid to education, for attractive public housing all this on a sufficiently massive scale to make a difference. We need to protest the notion that our integration into American life, so long delayed, must now proceed in an atmosphere of competitive scarcity instead of in the security of abundance which technology makes possible. We cannot claim to have answers to all the complex problems of modern society. That is too much to ask of a movement still battling barbarism in Mississippi. But we can agitate the right questions by probing at the contradictions which still stand in the way of the “Great Society.” The questions having been asked, motion must begin in the larger society, for there is a limit to what Negroes can do alone.

BlackPast, B. (2007, June 18). (1965) Bayard Rustin, “From Protest to Politics: The Future of the Civil Rights Movement”. BlackPast.org. https://www.blackpast.org/african-american-history/1965-bayard-rustin-protest-politics-future-civil-rights-movement-0/