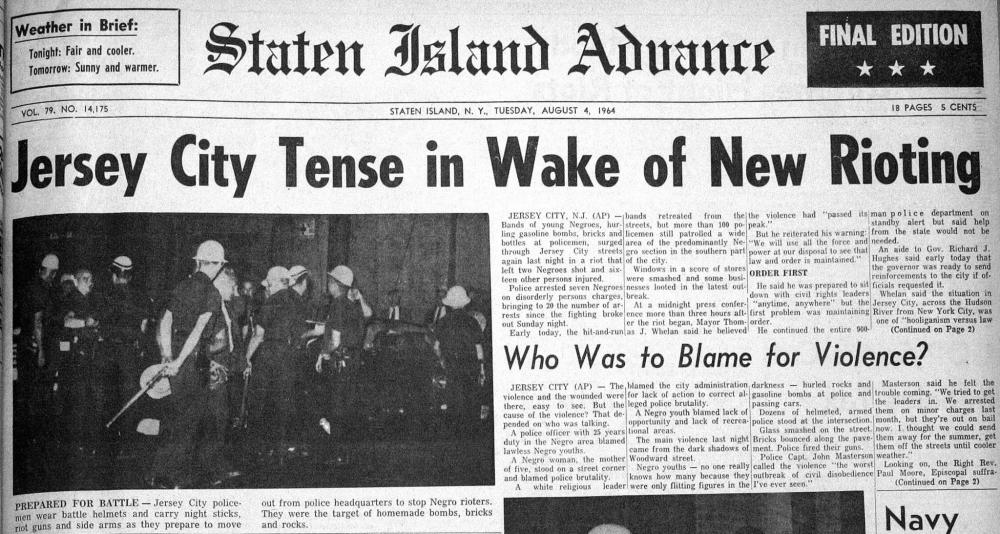 The 1964 Jersey City, New Jersey Uprising began August 2 and lasted three nights until the morning of August 5.  The uprising began in the predominantly black neighborhood of Lafayette in Jersey City after police arrested 26-year-old African American Delores Shannon for disorderly conduct and being drunk in public. Another African American, 34-year-old Walter Mays, attempted to intervene in Shannon’s arrest and was himself arrested.  The arrests of Shannon and Mays initiated the uprising.

Witnesses immediately began accusing the police of brutality, and violence broke out between groups of black youths—carrying bottles, rocks, clubs, and “gasoline bombs”—and the police.  An estimated 800 African Americans looted, threw rocks at passing vehicles, and attempted to pull people out of cars during the first night of the riot.  Approximately 150 police armed with shotguns and .38 caliber handguns were dispatched to end the rioting.  Thirty people, including 10 police officers, were injured.  Three white people were injured after being pulled from their cars and beaten.

Rioting continued on August 3 as Jersey City Councilman Fred Martin, Congress of Racial Equality (CORE) chairman John Bell, NAACP president Julian Robinson and local clergymen met with city officials including Mayor Whelan.  Arguing that a long history of neglect, abuse, and disenfranchisement of the African American community had led to the outbreak of the rioting, the community leaders asked the mayor to improve recreational facilities for black youth, hire more black policemen, and provide more employment opportunities for black people throughout the city.

The meeting lasted 26 minutes but Whelan and the community leaders could not come to any agreement on how to move forward.  Living conditions and job opportunities for all in the city were poor and, according to Whelan, the city was not in financial shape to promise any sweeping changes.  Whelan also claimed that the riot was the fault of a small minority of black youth and not a symptom of long term socioeconomic problems within the city.

By the evening of August 4, over 400 police officers attempted to stop the rioting.   At the same time, local clergymen drove through neighborhoods asking for an end to the violence and letting people know that one of the demands by the protesters had been met, two local parks were going to be re-opened.

Rioting ended on August 5.  At least 46 people were reported injured, 52 people were arrested and 71 stores and businesses were damaged.