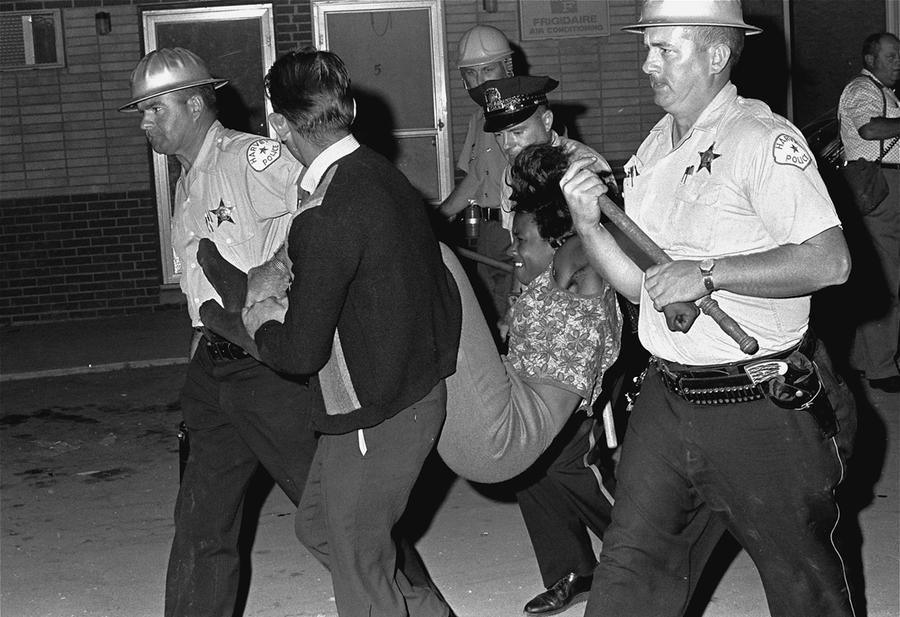 The Chicago Race Riot of 1964 was actually centered in Dixmoor, Illinois, a suburb southwest of the city.  By 1960 Dixmoor had less than 4,000 residents. Of that population over 50 percent of its residents were black. A large portion of Dixmoor’s black population were recently arrived migrants from Mississippi, Tennessee, and other southern states. This increase in population placed a heavy strain on the struggling black community.  Like African Americans nationwide, Dixmoor’s black residents were twice as likely to face poverty as local whites, and almost three times as likely to become unemployed.  Local whites often promoted discrimination in employment and housing segregation.  These practices intensified racial tensions between black and white Dixmoor residents which reached a boiling point in 1964.

The riot stemmed from an incident that took place on August 15. Blondella Woods, a black Dixmoor resident, was alleged to have stolen items from Foremost Liquor store. Store owner Michael LaPota apprehended Woods and physically attacked her.  Woods was arrested by police but LaPota faced no criminal charges for his assault against Woods.

After Woods’ arrest and the dismissal of assault charges against LaPota, the black community of Dixmoor on August 16 initiated a boycott of the Foremost Liquor Store accompanied by protest marches. They protested in part because this episode recalled for black migrants to Dixmoor the harsh brutality they faced from police and the criminal justice system in southern states. They and Dixmoor natives came together to support the boycott and to engage in a larger fight against racial injustice similar to the national civil rights protests occurring across the nation.

Dixmoor’s black residents initially engaged in peaceful demonstrations to promote the boycott but by the evening the protesters attacked the Foremost Liquor Store.  In response city official brought in officers from the Chicago Police Department (CPD) to confront the protesters.  Chicago police officers adopted a “shoot-on-sight” policy in response to any protester who in their opinion engaged in violence or resisted their orders. That policy enraged young local blacks even more and they began to attack passing motorists, throwing rocks, bottles, stones, and bricks.  Illinois state troopers who had also arrived on the scene fired over the heads of the rioters.

By the morning of August 17 when the violence finally ended, over 225 officers from the Cook County Sheriff’s Department, the Chicago Police Department and the Illinois State Troopers were in Dixmoor.  The conflict involved approximately 1,000 people including 37 Dixmoor protesters and rioters who were seriously injured and 25 people who were arrested. Local civil rights leaders claimed that most of the injuries stemmed from the violence of the CPD against black rioters. While smaller than most black-police confrontations in 1964 and the ones that followed during the rest of the decade, the Dixmoor riot was a reminder that many blacks all across the nation would—peacefully if possible, but violently if necessary—challenge the racial order in the United States.