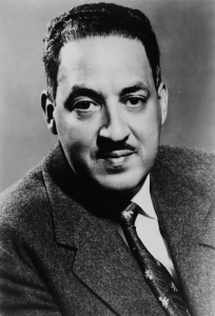 Many historians and legal scholars consider the U.S. Supreme Court’s 1954 decision in Brown v. Board of Education to be one of the most important and far reaching pronouncements in the history of the Court.  On December 8, 1953 Thurgood Marshall, the chief legal counsel of the National Association for the Advancement of Colored People (NAACP) gave the argument for the plaintiffs which appears below.

IT FOLLOWS THAT with education, this Court has made segregation and inequality equivalent concepts. They have equal rating, equal footing, and if segregation thus necessarily imports inequality, it makes no great difference whether we say that the Negro is wronged because he is segregated, or that he is wronged because he received unequal treatment…

I would like to say that each lawyer on the other side has made it clear as to what the position of the state was on this, and it would be all right possibly but for the fact that this is so crucial. There is no way you can repay lost school years.

These children in these cases are guaranteed by the states some twelve years of education in varying degrees, and this idea, if I understand it, to leave it to the states until they work it out-and I think that is a most ingenious argument- you leave it to the states, they say, and then they say that the states haven’t done anything about it in a hundred years, so for that reason this Court doesn’t touch it.

The argument of judicial restraint has no application in this case. There is a relationship between federal and state, but there is no corollary or relationship as to the Fourteenth Amendment.

And I think it makes no progress for us to find out who made what argument. It is our position that whether or not you base this case solely on the Intent of Congress or whether you base it on the logical extension of the doctrine as set forth in the McLaurin case, on either basis the same conclusion is required, which is that this Court makes it clear to all of these states that in administering their governmental functions, at least those that are vital not to the life of the state alone, not to the country alone, but vital to the world in general, that little pet feelings of race, little pet feelings of custom-I got the feeling on hearing the discussion yesterday that when you put a white child in a school with a whole lot of colored children, the child would fall apart or something. Everybody knows that is not true.

Those same kids in Virginia and South Carolina-and I have seen them do it-they play in the streets together, they play on their farms together, they go down the road together, they separate to go to school, they come out of school and play ball together. They have to be separated in school.

They can’t take race out of this case. From the day this case was filed until this moment, nobody has in any form or fashion, despite the fact I made it clear in the opening argument that I was relying on it, done anything to distinguish this statute from the Black Codes, which they must admit, because nobody can dispute, say anything anybody wants to say, one way or the other, the Fourteenth Amendment was intended to deprive the states of power to enforce Black Codes or anything else like it.

So whichever way it is done, the only way that this Court can decide this case in opposition to our position, is that there must be some reason which gives the state the right to make a classification that they can make in regard to nothing else in regard to Negroes, and we submit the only way to arrive at that decision is to find that for some reason Negroes are inferior to all other human beings.

Nobody will stand in the Court and urge that, and in order to arrive at the decision that they want us to arrive at, there would have to be some recognition of a reason why of all of the multitudinous groups of people in this country you have to single out Negroes and give them this separate treatment.

It can’t be because of slavery in the past, because there are very few groups in this country that haven’t had slavery some place back in history of their groups. It can’t be color because there are Negroes as white as the drifted snow, with blue eyes, and they are just as segregated as the colored man.

The only thing can be is an inherent determination that the people who were formerly in slavery, regardless of anything else, shall be kept as near that stage as is possible, and now is the time, we submit, that this Court should make it clear that that is not what our Constitution stands for.

BlackPast, B. (2012, January 16). (1953) Thurgood Marshall, “Argument Before the U.S. Supreme Court in Brown v. Board of Education”. BlackPast.org. https://www.blackpast.org/african-american-history/1953-thurgood-marshall-argument-u-s-supreme-court-brown-v-board-education/