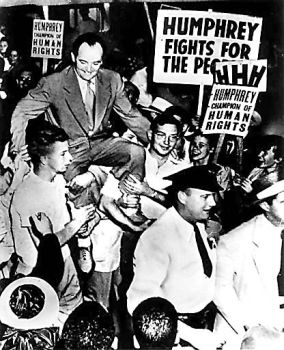 When the Democratic National Convention met in Philadelphia in July, 1948, Minneapolis, Minnesota’s 37  year old mayor, Hubert H. Humphrey, was a candidate for the U.S. Senate.  Humphrey was chosen to give one of the speeches at the convention and used the opportunity to propose a more aggressive civil rights plank in the party platform than President Harry Truman and other moderates wanted.  The Democrats adopted the Humphrey-supported plank, prompting a walkout of conservative Southern Democrats.  Humphrey was elected to the Senate from Minnesota in 1948, serving there until 1965 when he was elected Vice President during President Lyndon Johnson’s landslide victory in 1964.  Humphrey was the Democratic nominee for President in 1968, losing to Republican Richard Nixon.  Humphrey’s 1948 speech which launched his national political career appears below.

Mr. Chairman, fellow Democrats, fellow Americans:
I realize that in speaking in behalf of the minority report on civil rights as presented by Congressman DeMiller of Wisconsin that I’m dealing with a charged issue — with an issue which has been confused by emotionalism on all sides of the fence. I realize that there are here today friends and colleagues of mine, many of them, who feel just as deeply and keenly as I do about this issue and who are yet in complete disagreement with me.

My respect and admiration for these men and their views was great when I came to this convention. It is now far greater because of the sincerity, the courtesy, and the forthrightness with which many of them have argued in our prolonged discussions in the platform committee.

Because of this very great respect — and because of my profound belief that we have a challenging task to do here — because good conscience, decent morality, demands it — I feel I must rise at this time to support a report — the minority report — a report that spells out our democracy, a report that the people of this country can and will understand, and a report that they will enthusiastically acclaim on the great issue of civil rights.

Now let me say this at the outset that this proposal is made for no single region. Our proposal is made for no single class, for no single racial or religious group in mind. All of the regions of this country, all of the states have shared in our precious heritage of American freedom. All the states and all the regions have seen at least some of the infringements of that freedom — all people — get this — all people, white and black, all groups, all racial groups have been the victims at time[s] in this nation of — let me say — vicious discrimination.

The masterly statement of our keynote speaker, the distinguished United States Senator from Kentucky, Alben Barkley, made that point with great force. Speaking of the founder of our Party, Thomas Jefferson, he said this, and I quote from Alben Barkley:

Now these words of Senator Barkley’s are appropriate to this convention — appropriate to this convention of the oldest, the most truly progressive political party in America. From the time of Thomas Jefferson, the time when that immortal American doctrine of individual rights, under just and fairly administered laws, the Democratic Party has tried hard to secure expanding freedoms for all citizens. Oh, yes, I know, other political parties may have talked more about civil rights, but the Democratic party has surely done more about civil rights.

It seems to me — It seems to me that the Democratic Party needs to to make definite pledges of the kinds suggested in the minority report, to maintain the trust and the confidence placed in it by the people of all races and all sections of this country. Sure, we’re here as Democrats. But my good friends, we’re here as Americans; we’re here as the believers in the principle and the ideology of democracy, and I firmly believe that as men concerned with our country’s future, we must specify in our platform the guarantees which we have mentioned in the minority report.

Yes, this is far more than a Party matter. Every citizen in this country has a stake in the emergence of the United States as a leader in the free world. That world is being challenged by the world of slavery. For us to play our part effectively, we must be in a morally sound position.

We can’t use a double standard — There’s no room for double standards in American politics — for measuring our own and other people’s policies. Our demands for democratic practices in other lands will be no more effective than the guarantee of those practices in our own country.

Friends, delegates, I do not believe that there can be any compromise on the guarantees of the civil rights which we have mentioned in the minority report. In spite of my desire for unanimous agreement on the entire platform, in spite of my desire to see everybody here in honest and unanimous agreement, there are some matters which I think must be stated clearly and without qualification. There can be no hedging — the newspaper headlines are wrong. There will be no hedging, and there will be no watering down — if you please — of the instruments and the principles of the civil-rights program.

My friends, to those who say that we are rushing this issue of civil rights, I say to them we are 172 years late. To those who say that this civil-rights program is an infringement on states’ rights, I say this: The time has arrived in America for the Democratic Party to get out of the shadow of states’ rights and to walk forthrightly into the bright sunshine of human rights. People — human beings — this is the issue of the 20th century. People of all kinds — all sorts of people — and these people are looking to America for leadership, and they’re looking to America for precept and example.

My good friends, my fellow Democrats, I ask you for a calm consideration of our historic opportunity. Let us do forget the evil passions and the blindness of the past. In these times of world economic, political, and spiritual — above all spiritual crisis, we cannot and we must not turn from the path so plainly before us. That path has already lead us through many valleys of the shadow of death. And now is the time to recall those who were left on that path of American freedom.

For all of us here, for the millions who have sent us, for the whole two billion members of the human family, our land is now, more than ever before, the last best hope on earth. And I know that we can, and I know that we shall began [sic] here the fuller and richer realization of that hope, that promise of a land where all men are truly free and equal, and each man uses his freedom and equality wisely well.

My good friends, I ask my Party, I ask the Democratic Party, to march down the high road of progressive democracy. I ask this convention to say in unmistakable terms that we proudly hail, and we courageously support, our President and leader Harry Truman in his great fight for civil rights in America!