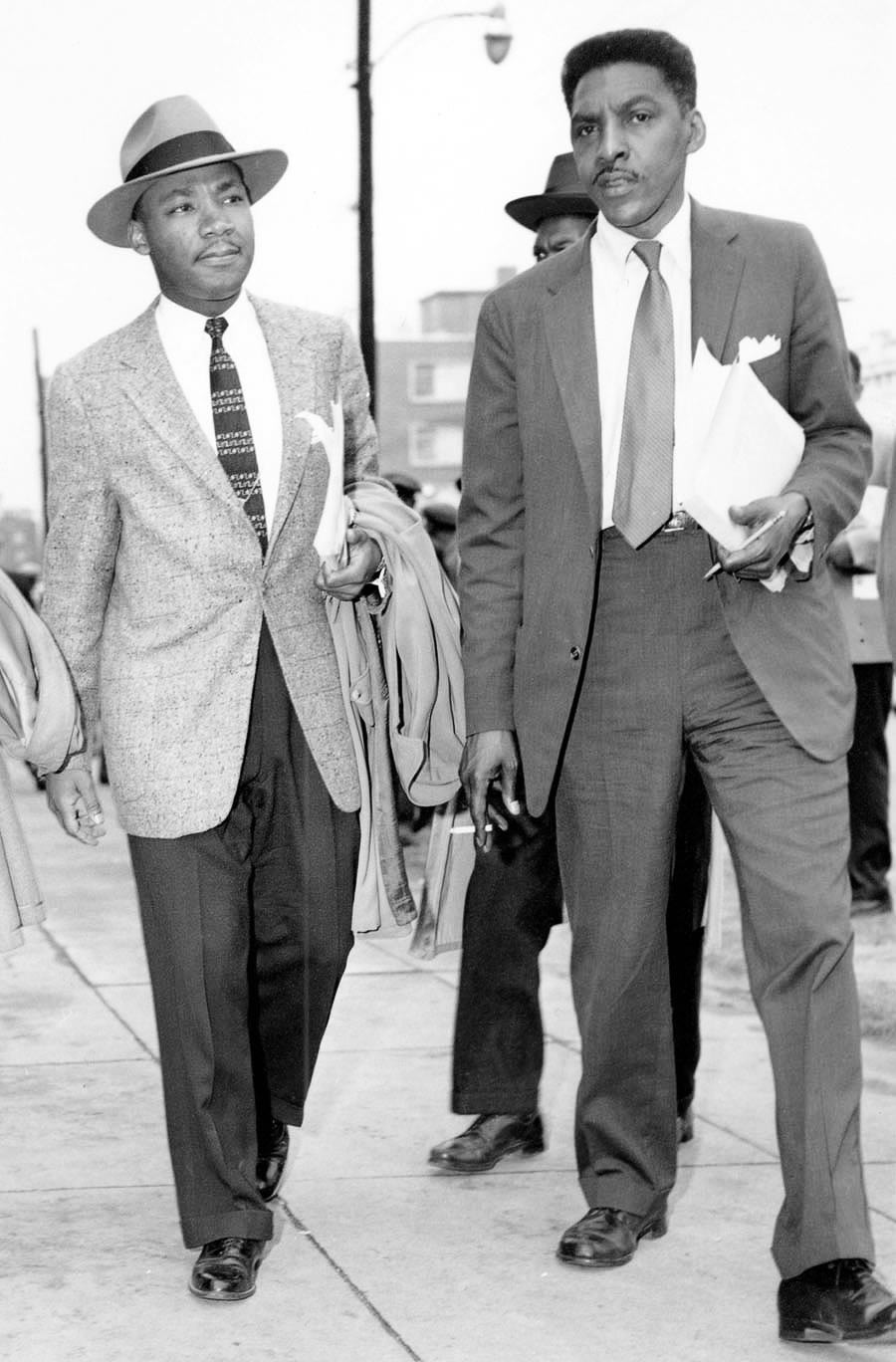 By the early 1960s, Bayard Rustin emerged as a major strategist for the civil rights movement and adviser to Dr. Martin Luther King.  In 1948, however, he was less well known among the American population, but most of his political and economic views were well-developed.  In World War II, for example, Rustin spent two years in prison as a conscientious objector to the draft.  In the speech below, he argues that young black men should challenge segregation in the U.S. military and in society in general through civil disobedience campaigns.  He calls on them to refuse to serve if they are drafted.

IT IS A REAL OPPORTUNITY to speak with American citizens who seriously seek to remove racial and religious intolerance from our national life, for recent history amply reveals that America cannot gain moral leadership in the world until intolerance of minority groups has been eliminated at home. The Journey of Reconciliation was organized not only to devise techniques for eliminating Jim Crow in travel, but also as a training ground for similar peaceful projects against discrimination in such major areas as employment and in the armed services.

The use of these methods against Jim Crow military service is a regrettable necessity. Today no single injustice more bitterly stands out in the hearts and minds of colored people the world over, or continues more successfully to frustrate the United States’ efforts abroad, than the continuation of discrimination and segregation in our military forces.

As a follower of the principles of Mahatma Gandhi, I am an opponent of war and of war preparations and an opponent of universal military training and conscription; but entirely apart from that issue, I hold that segregation in any part of the body politic is an act of slavery and an act of war. Democrats will agree that such acts are to be resisted, and more and more leaders of the oppressed are responsibly proposing nonviolent civil disobedience and non- cooperation as the means.

On March 22, 1948, A. Philip Randolph and Grant Reynolds, trusted Negro leaders, told President Truman that Negroes “do not propose to shoulder another gun for democracy abroad while they are denied democracy here at home.” A few days later, when Mr. Randolph testified before the Senate Armed Services Committee, he declared that he openly would advise and urge Negro and white youth not to submit to Jim Crow military institutions. At this statement, Senator Wayne Morse interrupted and warned Mr. Randolph that “the Government would apply the legal doctrine of treason to such conduct.”

This is a highly regrettable statement for a United States senator to make. Certainly throughout Asia and Africa millions must have agreed with the lovers of freedom here who reasoned that if treason is involved, it is the treason practiced by reactionaries in the North and South who struggle to maintain segregation and discrimination and who thus murder the American creed.  The organizers and perpetuators of segregation are as much the enemy of America as any foreign invader. The time has come when they are not merely to be protested. They must be resisted.

The world and the United States should know that there are many younger leaders, both black and white, in positions of responsibility who, not wishing to see democracy destroyed from within, will support Mr. Randolph and Mr. Reynolds.

We know that men should not and will not fight to perpetuate for themselves caste and second-class citizenship. We know that men cannot struggle for someone else’s freedom in the same battle in which they fasten semi-slavery more securely upon themselves. While there is a very real question whether any army can bring freedom, certainly a Jim Crow army cannot. On the contrary, to those it attempts to liberate, it will bring discrimination and segregation such as we are now exporting to Europe and to South America. To subject young men at their most impressionable age to a forced caste  system, as now outlined in the Universal Military Training and Selective Service bills, is not only undemocratic but will prove to be suicidal.

Segregation in the military must be resisted if democracy and peace are to survive. Thus civil disobedience against caste is not merely a right but a profound duty. If carried out in the spirit of good will and nonviolence, it will prick the conscience of America as Gandhi’s campaigns stirred the hearts of men the world over.

Therefore, in the future I shall join with others to advise and urge Negroes and white people not to betray the American ideal by accepting Jim Crow in any of our institutions, including the armed services. Further, I serve notice on the government that, to the extent of my resources, I shall assist in the organization of disciplined cells across the nation to advise resistance and to provide spiritual, financial, and legal aid to resisters.

If Senator Morse and the government believe that intimidation, repression, prison, or even death can stop such a movement, let them examine past struggles for freedom. If the government continues to consider such action treason, let it recall the advice that Justice Jackson gave the German people at the opening of the Nuremberg trials: “Men,” he said, “are individually responsible for their acts, and are not to be excused for following unjust demands made upon them by governments.” Failure of the German citizens to resist antisocial laws from the beginning of the Hitler regime logically ended in their placing Jews in gas furnaces and lye pits. Justice Jackson indicated in conclusion that individual resistance to undemocratic laws would have been a large factor in destroying the unjust Nazi state.

I believe that American citizens would do well to ponder Mr. Jackson’s remarks. Civil disobedience is urged not to destroy the United States but because the government is now poorly organized to achieve democracy. The aim of such a movement always will be to improve the nature of the government, to urge and counsel resistance to military Jim Crow in the interest of a higher law-the principle of equality and justice upon which real community and security depend.

I sincerely hope that millions of Negroes and white people who cherish freedom will pledge themselves now to resist Jim Crow everywhere, including the military establishments. Thereby the United States may, in part, achieve the moral leadership in world affairs for which we so vigorously strive. I urge you to register this intention now with your .Senators and Congressmen It is my supreme desire that those who resist will do so in that spirit which is without hatred, bitterness, or contention. I trust that all resisters will hold firm to the true faith that only good-will resistance, in the end, is capable of overcoming injustice.