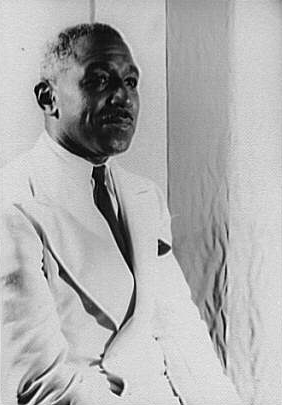 Negro art “made in America” is as non-existent as the widely advertised profundity of Cal Coolidge, the “seven years of progress” of Mayor Hylan, or the reported sophistication of New Yorkers. Negro art there has been, is, and will be among the numerous black nations of Africa; but to suggest the possibility of any such development among the ten million colored people in this republic is self-evident foolishness. Eager apostles from Greenwich Village, Harlem, and environs proclaimed a great renaissance of Negro art just around the corner waiting to be ushered on the scene by those whose hobby is taking races, nations, peoples, and movements under their wing. New art forms expressing the “peculiar” psychology of the Negro were about to flood the market. In short, the art of Homo Africanus was about to electrify the waiting world. Skeptics patiently waited. They still wait.

True, from dark-skinned sources have come those slave songs based on Protestant hymns and Biblical texts known as the spirituals, work songs and secular songs of sorrow and tough luck known as the blues, that outgrowth of ragtime known as jazz (in the development of which whites have assisted), and the Charleston, an eccentric dance invented by the gamins around the public market-place in Charleston, S. C. No one can or does deny this. But these are contributions of a caste in a certain section of the country. They are foreign to Northern Negroes, West Indian Negroes, and African Negroes. They are no more expressive or characteristic of the Negro race than the music and dancing of the Appalachian highlanders or the Dalmatian peasantry are expressive or characteristic of the Caucasian race. If one wishes to speak of the musical contributions of the peasantry of the south, very well. Any group under similar circumstances would have produced something similar. It is merely a coincidence that this peasant class happens to be of a darker hue than the other inhabitants of the land. One recalls the remarkable likeness of the minor strains of the Russian mujiks to those of the Southern Negro.

This, of course, is easily understood if one stops to realize that the Aframerican is merely a lampblacked Anglo-Saxon. If the European immigrant after two or three generations of exposure to our schools, politics, advertising, moral crusades, and restaurants becomes indistinguishable from the mass of Americans of the older stock (despite the influence of the foreign-language press), how much truer must it be of the sons of Ham who have been subjected to what the uplifters call Americanism for the last three hundred years. Aside from his color, which ranges from very dark brown to pink, your American Negro is just plain American. Negroes and whites from the same localities in this country talk, think, and act about the same. Because a few writers with a paucity of themes have seized upon imbecilities of the Negro rustics and clowns and palmed them off as authentic and characteristic Aframerican behavior, the common notion that the black American is so “different” from his white neighbor has gained wide currency. The mere mention of the word “Negro” conjures up in the average white American’s mind a composite stereotype of Bert Williams, Aunt Jemima, Uncle Tom, Jack Johnson, Florian Slappey, and the various monstrosities scrawled by the cartoonists. Your average Aframerican no more resembles this stereotype than the average American resembles a composite of Andy Gump, Jim Jeffries, and a cartoon by Rube Goldberg.

Again, the Aframerican is subject to the same economic and social forces that mold the actions and thoughts of the white Americans. He is not living in a different world as some whites and a few Negroes would have me believe. When the jangling of his Connecticut alarm clock gets him out of his Grand Rapids bed to a breakfast similar to that eaten by his white brother across the street; when he toils at the same or similar work in mills, mines, factories, and commerce alongside the descendants of Spartacus, Robin Hood, and Erik the Red; when he wears similar clothing and speaks the same language with the same degree of perfection; when he reads the same Bible and belongs to the Baptist, Methodist, Episcopal, or Catholic church; when his fraternal affiliations also include the Elks, Masons, and Knights of Pythias; when he gets the same or similar schooling, lives in the same kind of houses, owns the same Hollywood version of life on the screen; when he smokes the same brands of tobacco and avidly peruses the same puerile periodicals; in short, when he responds to the same political, social, moral, and economic stimuli in precisely the same manner as his white neighbor, it is sheer nonsense to talk about “racial differences” as between the American black man and the American white man. Glance over a Negro newspaper (it is printed in good Americanese) and you will find the usual quota or crime news, scandal, personals, and uplift to be found in the average white newspaper—which, by the way, is more widely read by the Negroes than is the Negro press. In order to satisfy the cravings of an inferiority complex engendered by the colorphobia of the mob, the readers of the Negro newspapers are given a slight dash of racialistic seasoning. In the homes of the black and white Americans of the same cultural and economic level one finds similar furniture, literature, and conversation. How, then, can the black American be expected to produce art and literature dissimilar to that of the white American?

Consider Coleridge-Taylor, Edward Wilmot Blyden, and Claude McKay, the Englishmen; Pushkin, the Russian; Bridgewater, the Pole; Antar, the Arabian; Latino, the Spaniard; Dumas, père and fils,the Frenchmen; and Paul Laurence Dunbar, Charles W. Chestnut, and James Weldon Johnson, the Americans. All Negroes; yet their work shows the impress of nationality rather than race. They all reveal the psychology and culture of their environment—their color is incidental. Why should Negro artists of America vary from the national artistic norm when Negro artists in other countries have not done so? If we can foresee what kind of white citizens will inhabit this neck of the woods in the next generation by studying the sort of education and environment the children are exposed to now, it should not be difficult to reason that the adults of today are what they are because of the education and environment they were exposed to a generation ago. And that education and environment were about the same for blacks and whites. One contemplates the popularity of the Negro-art hokum and murmurs, “How-come?”

This nonsense is probably the last stand or the old myth palmed off by Negrophobists for all these many years, and recently rehashed by the sainted Harding, that there are “fundamental, eternal, and inescapable differences” between white and black Americans. That there are Negroes who will lend this myth a helping hand need occasion no surprise. It has been broadcast all over the world by the vociferous scions of slaveholders, “scientists” like Madison Grant and Lothrop Stoddard, and the patriots who flood the treasure of the Ku Klux Klan; and is believed, even today, by the majority of free, white citizens. On this baseless premise, so flattering to the white mob, that the blackamoor is inferior and fundamentally different, is erected the postulate that he must needs be peculiar; and when he attempts to portray life through the medium of art, it must of necessity be a peculiar art. While such reasoning may seem conclusive to the majority of Americans, it must be rejected with a loud guffaw by intelligent people.